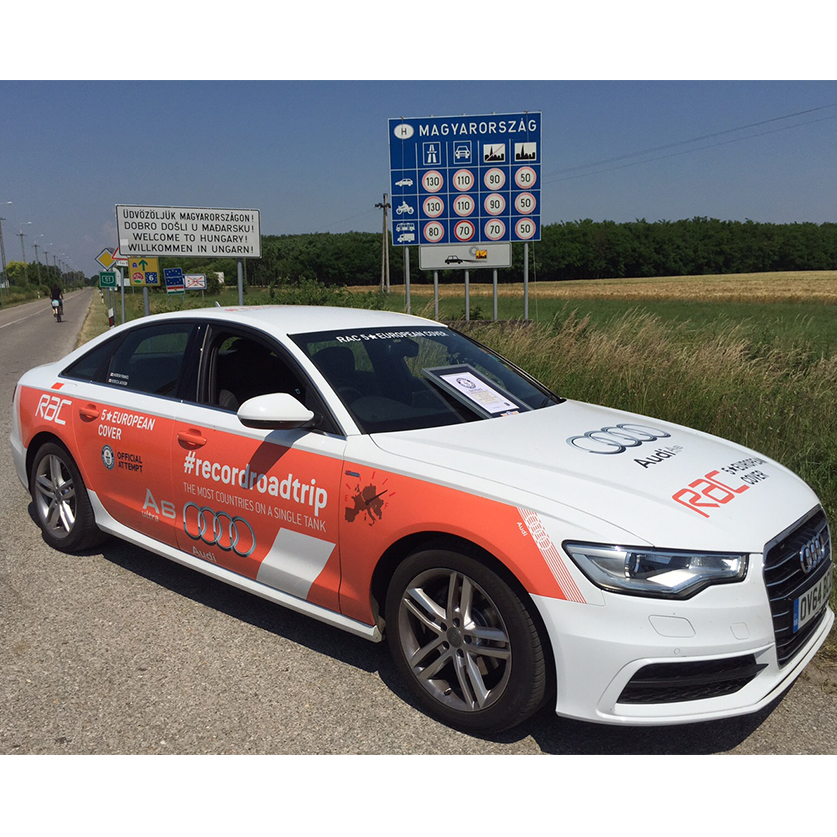 Drive to 14 countries on a single tank of fuel

The journey began in Maastricht on Tuesday 9 June and ended in Hungary on Wednesday 10 June with the pair averaging 75.9 miles to the gallon from the A6’s 73-litre fuel tank.

The route was painstakingly picked by the RAC, which has more than 100 years’ experience of providing European breakdown cover for members, to avoid the mpg-sapping effects of built-up, congested towns, cities and mountains.

RAC #RecordRoadTrip coordinator Simon Williams said: “The last few miles of the GUINNESS WORLD RECORDS title attempt were nail-biting as the A6 ultra’s computer was reading ‘zero miles’ with 16 miles to go to reach Hungary to make it 14 countries.

“Andrew and Rebecca’s achievement in driving the A6 ultra 1,158.9 miles and setting a new Guiness World Records title for the RAC and Audi is phenomenal. We were very keen to use a standard executive class production car, the like of which is regularly driven through Europe by British holidaymakers every summer, to set a record that will be tough to beat.”

Jon Zammett, head of Audi UK public relations, said: “By covering so much of Europe on a single fill-up, we have proven that real-world economy of almost 76mpg or more can be had from the latest engine technology. The Audi A6 TDI ultra has proven the range capability of one of the world’s most advanced executive cars.”

Andrew and Rebecca faced numerous challenges in their 28-hour driving adventure including diversions for both heavy traffic due to an accident and a closed tunnel which led to an unplanned mountain detour.

Andrew Frankel, said: “Despite sharing the driving we were on the road almost continuously for 25 hours, focussed on maintaining an average speed of around 50mph. In order to do this you have to be fully aware of what’s going on around you and anticipate what could happen with the traffic ahead. While it was normal driving in one sense, it was also a very different type of driving, but nevertheless demanding.”

Racing driver Rebecca Jackson added: “I feel Andrew and I have helped the RAC and Audi set a record to be proud of. I’m known for driving pretty fast, but this challenge was naturally more about maintaining a constant, fuel-efficient speed and not being caught out by vehicles which would cause us to slow down and then accelerate to the optimum speed again. This was an amazing event and a very different long-distance driving challenge to what I’m doing next year when I compete in the 24 Hours of Le Mans 2016.”