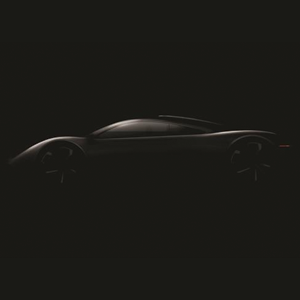 The car commemorates 50 years of Gordon Murray car design and was announced at the start of the special ‘One Formula’ exhibition that gathered 40 models penned by the legendary designer.

The new car will be Gordon Murray Automotive’s first model, encompassing remarkable attention to detail to ensure it is an engineering work of art. Featuring the very latest materials and technology, the car will focus on light weight and driving pleasure – inspired by the engineering principles of the McLaren F1. It will be built for contemporary driving conditions, and will incorporate some of the most advanced aerodynamics yet seen on a road car. The vehicle’s architecture will be based on a new version of Gordon Murray Design’s revolutionary iStream system, which was officially launched at today’s event.

‘iStream superlight’ employs high-strength aluminium sections in place of the steel used in iStream and iStream Carbon. Its additional weight reduction over the current process delivers a body-in-white structure approaching 50% of the weight of stamped metal, while achieving new levels of rigidity, durability and platform flexibility. iStream superlight is the ultimate development of iStream technology and promises to be the lightest and most efficient process for body-in-white manufacturing for decades to come.

The re-launch of the IGM brand celebrates 50 years of car design for Murray. The newly-revealed IGM logo is a re-design of the badging applied to Gordon Murray’s very first car – the ‘T.1’ IGM Ford Special, which Murray raced successfully in South Africa in 1967 and 1968. The IGM brand will feature on all future in-house projects built by Gordon Murray Automotive.

The invitation-only ‘One Formula’ exhibition at Dunsfold Park gathers – for the first and possibly only time – almost every race and road car from Gordon Murray’s 50-year career. The exhibition also celebrates the 10-year anniversary of both the Gordon Murray Design business and iStream manufacturing process, as well as the 25th year since the McLaren F1 road car entered production.

On display are 40 different vehicles and designs, including familiar milestone cars* as well as those that have never or rarely been on show before. The exhibition charts the history of advanced aerodynamics and composite technology in each of Gordon Murray’s projects, and features detailed insight into Gordon Murray Design’s ground-breaking iStream manufacturing technology.

Alongside the exhibition of his own designs, Gordon Murray will display vehicles from his private car collection for the first time. ‘Gordon’s Garage’ will feature a variety of classic cars and motorbikes, including two Lotus Elans, a Honda S800, Abarth 750 Zagato and a very rare De Tomaso Vallelunga.

The ‘One Formula’ exhibition is housed at Gordon Murray’s newest premises, a 1,500m2 building that joins two of the company’s other facilities within Dunsfold Park. This year, Gordon Murray R&D will relocate from Shalford, Surrey, to the new building that houses Gordon Murray Automotive. The R&D arm will have fully-automated robot cells for making iPanels, welding iFrames and bonding. It will also continue to develop the iStream process, and progress several other patents including iLink, iCase and iSeat. Gordon Murray Design will retain its premises in Shalford, Surrey, while it develops plans for a new company headquarters.