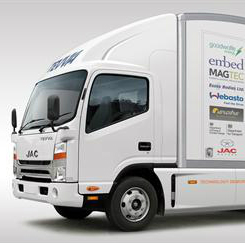 Nobull Communications has been appointed by electric truck company Tevva Motors as its PR, social and digital agency to drive the company’s next round of investment.

Tevva Motors is at the forefront of the development of the next generation of electric urban delivery trucks.  Its innovative technology can be retrofitted to older vehicles or incorporated in new builds on the production line and already counts UPS as one of its customers.

Nobull Communications has been tasked with raising Tevva’s profile for its next round of investment, key for its continued development of new technology which it intends to bring to market in the next three years.

“Tevva may only be a few years old, but it has a fascinating story to share. We are very excited at being able to bring Tevva and its new technologies to life across a range of PR, social media and digital channels,” said Steve Carman, Director of Nobull Communications.