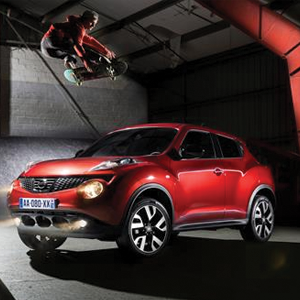 Nissan Design Europe, the brand’s world-class creative hub and starting point for some of today’s most popular and innovative models, this month celebrates 15 years at its current home.

The studio officially opened its doors for business on 25 January 2003 in the Paddington area of London. It followed an extensive renovation program which transformed a disused and graffiti-covered transport depot – officially called The Rotunda – into an ultra-cool urban design space.

Known internally as NDE, for a decade and a half it has been at the heart of Nissan’s success in Europe – particularly on crossovers. The original Nissan Qashqai concept (2003) began life on the drawing boards of NDE, as have all the production versions which followed.

NDE has also been the driving force behind the Qashqai’s baby brother, the Nissan Juke. The first hints of its muscular stance appeared on the Qazana concept (2009).

Together they pioneered demand for crossovers, and have transformed the European automotive landscape as every other brand followed Nissan’s lead.

A European design studio for Infiniti, Nissan’s premium brand, opened on site in 2014.

Mamoru Aoki, vice president, Nissan Design Europe, commented: “NDE has made an outstanding contribution to Nissan’s global product range of today, especially with the Qashqai and Juke, which have delivered new levels of choice, versatility and innovation for consumers.”

To celebrate 15 years in its current London home, Mamoru has created a personal list of his 15 favourite designs of the last 15 years (see below). It includes his thoughts on why each model – a mix of concept cars and production vehicles from Nissan and Infiniti – justifies its place on his list.

Mamoru added: “Nissan Design Europe arrived at The Rotunda in 2003, when our design ethos was ‘bold and thoughtful’. In the time since, the concept cars and production vehicles which have started life in that building all clearly display those two characteristics.”

Nissan’s innovative approach to automotive design continues with its latest European model, the new Nissan LEAF, which goes on sale from next month. It is the icon of the Nissan Intelligent Mobility vision for a more exciting, more confident and more connected future.

“We are celebrating our 15th anniversary this month, but it is just the start. We have a talented team at NDE today, working hard to continue the Nissan success story in Europe for another 15 years and beyond,” Mamoru concluded.