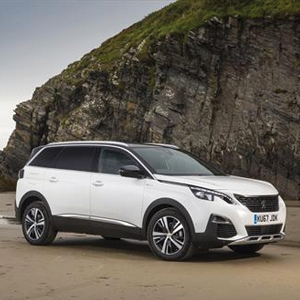 The number of households with three children or more is at its highest since 2003, according to data from the Office of National Statistics (ONS).

With UK law stating that all children under the age of 12 or 135cm**** (whichever comes first) need to be in the correct child seat, PEUGEOT’s all-new 7-seat 5008 SUV goes on sale as one of the few vehicles available with three ISOFIX anchor points across the middle row. The ISOFIX safety system was first introduced 20 years ago*.

With 1.19 million families in the UK now consisting of three or more children**, the introduction of the safety feature across the whole of the second row of seats could help provide growing families with additional peace of mind.

As well as there being more large families, the number of twins and multiple births has also increased, having almost doubled in the last 40 years***.

The rising number of families with three or more children may have led to increased demand for versatile family vehicles that can accommodate larger numbers of young children.

The all-new PEUGEOT 5008 SUV is one of the first SUVs to be launched in the UK with three ISOFIX points in the second row, allowing parents to fit three child seats next to each other.

The International Standards Organisation Fix (ISOFIX) was first introduced 20 years ago in the EU in 1997* and, since then, has become the international standard system for fitting a child car seat.

Mark Pickles, PEUGEOT Marketing Director, said: “With many more families in the UK having three or more children, the reality is that parents need to be able to fit more child seats into their vehicle. By including three ISOFIX points across the second row and ensuring a practical and adaptable interior space, the modularity of the final design of the all-new 5008 SUV helps brings ease and comfort to the lives of young, active families.”

It boasts a huge boot capacity and its practical, cleverly designed interior offers a host of accessories and 38 litres of storage spaces distributed throughout the passenger compartment, giving families the versatility and spaciousness they require for family car trips.