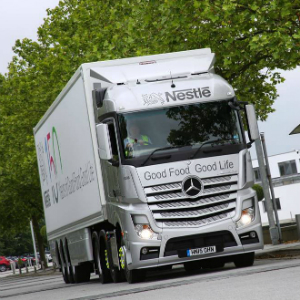 So taken was Nestlé UK with the eye-catching appearance of its first seven Mercedes-Benz Actros tractor units that it promptly switched from its previous white colour scheme to a new, metallic silver livery which complements their stylish good looks.

Now the world’s largest food and beverage company has commissioned four more Actros with new, second-generation engines. It has also ordered no fewer than 70 new 13.6m Montracon box semi-trailers with matching silver side skirts, the first of which have entered service – one of these trailers wears special graphics, highlighting the company’s 150th anniversary.

Nestlé’s first Mercedes-Benz tractor units have been on the road for more than a year. Supplied by Dealer Northside Truck & Van, all are 375 kW (510 hp) Actros 2551 StreamSpace models and based at the operator’s production facility in York.

As Fleet Manager Mick Thompson confirmed, they have been a success since day one. “Our drivers sleep in their vehicles and really appreciate the comfort of the beds and all-round quality of their flat-floored Actros cabs, while a lot of people have commented on how stunning these vehicles look,” he enthused.

“They’re brilliant in terms of fuel efficiency too. The first seven trucks are returning between 9 and 9.1 mpg, which means they’re almost a mile ahead of our previous fleet average. And although we’ve only just set the four new units on the road, at 9.4 mpg they’re already doing even better!”

All of Nestlé’s Actros are equipped with Predictive Powertrain Control systems, which boost economy while also reducing wear and tear on the driveline by employing engine braking at every opportunity, and helping to make shifts at the wheel less stressful for drivers.

The latest vehicles are 2551 versions with aerodynamic StreamSpace cabs too, but their 12.8-litre, six-cylinder OM471 engines are from the recently revamped range which, thanks to a raft of improvements including updated turbochargers and revised injection systems, offer average fuel savings compared to their already-frugal predecessors of around 3%. 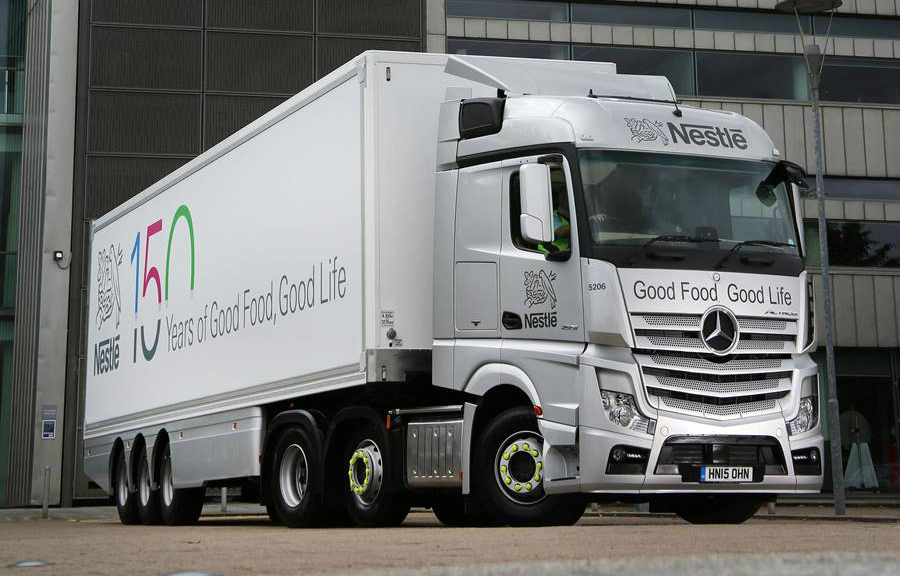 Nestlé’s origins date back to 1866 and the foundations of two separate Swiss enterprises that would later form the company’s core. Over the decades that followed the Anglo-Swiss Condensed-Milk Company, established by brothers George Page and Charles Page, and Farine Lactée Henri Nestlé, founded by Henri Nestlé, expanded their businesses throughout Europe and the United States, before they merged in 1905 to form Nestlé.

Today, the company has 436 factories and operates in 189 countries. Its portfolio includes high-profile brands such as Kit Kat, Nescafé and Nespresso, Shreddies, Smarties and Buxton Natural Mineral Water.

Nestlé’s York-based tractors deliver finished products to the regional distribution centres of leading retailers. However, the fleet includes a number of tank trailers which are used to deliver liquid chocolate to factories, and the trucks also make collections from suppliers and other production facilities – Buxton Natural Mineral Water’s base in the North Derbyshire Peak District, for example, is a regular destination.

Mick Thompson continued: “Our relationship with Mercedes-Benz and Northside Truck & Van is still new but we’re certainly happy with the way things are going. Any minor issues have been very quickly resolved and the Dealer’s Truck Sales Business Manager Emma Young is extremely customer-focused.

“On Northside’s recommendation we went with PPC from the outset and this is obviously contributing to the very significant savings we’re now making on our diesel bill, and the reductions we’ve achieved in our carbon emissions.”

PPC is an innovative cruise control that employs digital 3D mapping and GPS data to scan the road ahead. Armed with this information it manages gear changes and vehicle speed, making full use of the truck’s EcoRoll function at every opportunity to restrict diesel consumption and CO2 emissions.

Tests have shown that PPC can deliver savings of 5%, although many UK operators have reported much higher gains. The system is available as an option on new Actros and can now also be retro-fitted to vehicles already on the road.