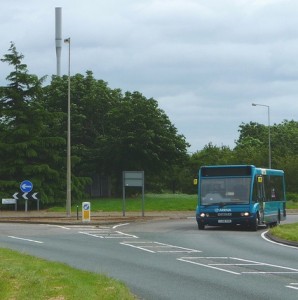 Bus drivers in Milton Keynes are set to go green after eight new electric StreetLite buses were delivered to the borough.

The vehicles, which replace the fleet of diesel buses operating on the demanding 15mile Route 7, will make their debut in January.

Arriva drivers will be trained on not only how to drive the vehicle, but also how to recharge at the end of the route and maximise performance.

The wirelessly-charged buses have been developed and built by Wrightbus Limited, and will be trialled in a collaboration programme being led by eFleet Integrated Service (eFIS).

Paul Adcock, Area MD of Arriva, said: “Electric buses have huge potential, and we’re exploring how they can help us take better care of the environment without compromising passenger service.

“With the help of the project collaborators, we’ll be monitoring the buses closely over the next five years.”

Image courtesy of dcmaster, with thanks.