Midlands motorway network of “vital importance” to economic growth, according to leading academic 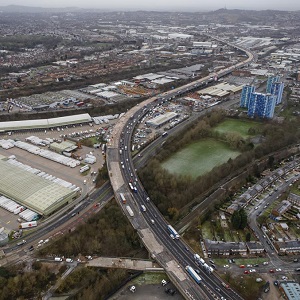 The M6 and M5 in the Midlands are of “vital importance” to the economic growth of the country according to a leading academic from Aston University.
Both routes – the majority of which are elevated structures in the Birmingham and Black Country region – see in excess of 500,000 vehicles travelling on them every day.

With 2018 the Year of Engineering, the role of the Midlands motorway network in improving lives and creating economic growth has never been more important.
Linking the north to the south and vice versa, the M5 provides a key arterial route to the south west for tourism and popular holiday destinations such as Cornwall.

“In the context of the wider Midlands road infrastructure’s position in the national logistics network, both the M5, M6 and Spaghetti Junction as structures and routes continue to play key roles in the transport sector,” explains Ed Sweeney, Professor of Logistics at Aston University.
“The M6 is a vital logistics arterial route linking the “golden triangle” in the Midlands with London and the south east (via the M1), the north west and Scotland (via the M74).

“In this way the M6 is a key part of national and regional economic activity and growth. Spaghetti Junction plays a key role in linking this artery with the city of Birmingham (principally via the A38(M).

“In addition, the M6 also runs from the M1 near Rugby and is within an area of highly intensive logistical activity. It also passes through several major urban centres (e.g. Birmingham, Stoke-on-Trent, Liverpool, Manchester, Preston, Lancaster and Carlisle) terminating just short of the Scottish border. There should be no denying the significance of how important the M6 continues to be.”

Having stood tall across the city of Birmingham with columns spanning some 80ft high, June this year will see Spaghetti Junction mark the 50th anniversary of work starting to construct the sprawling structure which carries more than 220,000 vehicles every day.

“The UK transport and logistics sector is vital to the country’s economic wellbeing,” adds Professor Sweeney, who is also director of the Aston Logistics & Systems Institute, a world class research facility based at the university. “The logistics industry itself is worth in excess of £90 billion to the national economy and employs at least one in every twelve UK workers. Moreover, this logistical activity is an essential enabler of other key strategic sectors of the economy (particularly in retail and manufacturing), as well as being vital to the provision of essential public services. The Midlands lies at the heart of this UK logistics network with the majority of freight being transported by road.

“The growth of e-commerce means that home deliveries have now become even more important. Their effectiveness depends critically on the road infrastructure. In this way, the quality of life in the region has been, and will continue to be, dependent on the economic benefits provided by the Midland’s road network.”
With both routes reaching a combined age of almost 100 years old in the Midlands, repair schemes to keep the road network flowing are vital.
The M5 at Oldbury near junction 1 is currently undergoing a major repair programme to repair damaged concrete and bridge decks. It is the largest concrete repair scheme by value – £100m – ever undertaken in Britain.

And while the work may not be popular with some using the route on a daily basis, Professor Sweeney says the repair work is crucial to ensure tourism in the south west continues to flourish.

“The M5 is also a key part of the national logistics and distribution network. It links the “golden triangle” in the Midlands with the south west and south Wales (two strategically important regions in the wider economic landscape). Its significance as a logistics channel is likely to be mirrored in the flow of passengers, a key enabler of tourism.”

Regional director at Highways England, Catherine Brookes said: “We know that the Midlands motorway network is the heartbeat to the economic growth and development of the country. That’s why repair schemes such as the Oldbury viaduct repair team are so crucial and in doing so, given the elevated position of the road, that we do it safely. The M6 and the M5 carry tens of thousands of vehicles every day and we do an incredible amount of work to keep them free-flowing and incident free.”