Mercedes Enters Into The Next Phase Of The Market 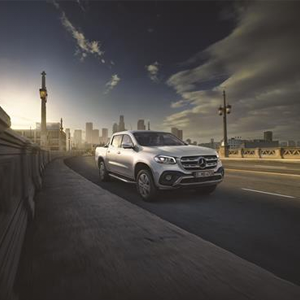 Mercedes-Benz Vans has revealed a new advert for the X-Class, following an online teaser published in July, marking the start of the ramp-up phase of the market launch.

The advert has been released across social media channels and will run from mid-December 2017 until February 2018 in the trailers before the new Star Wars movie, which is set to be the biggest box office smash of all time, at selected UK cinemas.

The TV advert, “Follow”, illustrates the versatility of the new X-Class; combining the typical characteristics of a pickup with the strengths of a Mercedes-Benz – robustness with modern design, impressive off-road capabilities with a high level of driving dynamics and safety. As a result, the X-Class appeals to different types of drivers, from sports enthusiasts to farmers, which is mirrored in the TV advert, accompanying the vehicle while navigating the roughest of terrains and urban lifestyle environment, inspiring people and turning them into “followers”.

The audience accompanies the X-Class as it enters this new world – a world it immediately conquers. Wherever the X-Class appears, from the roughest desert to the most stylish urban setting, everyone becomes a follower, enchanting people, animals, creatures (even monsters) from the very first moment.

The X-Class market launch campaign was developed together with the creative agency Lukas Lindemann Rosinski. The TV advert was produced by the Markenfilm production company and directed by Jan Wentz. The product film was realised by the production company Nylon and directed by Casper Balslev. The motifs were photographed by Anke Luckmann. Scholz & Volkmer is responsible for the online element.