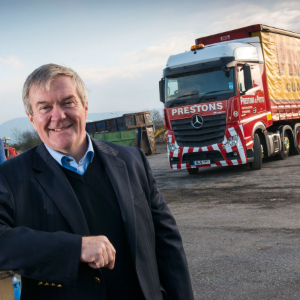 A winning performance at the pumps from a Mercedes-Benz Fuel Challenger demonstration unit convinced high-profile haulier Prestons of Potto to invest in 12 new tractors.

All 2545 models with BigSpace cabs and 330 kW (450 hp) straight-six engines, the trucks are now hard at work hauling steel and construction materials across the UK.

As Managing Director David Preston confirmed, after just a couple of months on the road they are already living up to the Fuel Challenger’s promise, delivering mpg returns that put them well ahead of the fleet average.

“In December our new Actros averaged 9 mpg,” he said. “That might not sound particularly impressive but our trucks are fully laden almost all of the time and our routes take them over some difficult terrain. To put it in context, the average figure across the fleet in the same period was 7.97 mpg.”

Prestons of Potto staged a comprehensive evaluation exercise before placing its order, in which demonstration units supplied by a number of manufacturers went head-to-head.

“We used a set course, with vehicles running between our headquarters in Northallerton and East Kilbride, hauling a 4.5-metre high curtainsider that was fully laden both ways,” recalled Mr Preston.

“Each truck covered the route on multiple occasions to iron out variations caused by differences in weather and traffic conditions, while we also invited those suppliers taking part to provide support from their driver-trainers to ensure each vehicle performed at its very best.

“It was a tough trial as the results proved, with most of the trucks struggling to hit 7 mpg. The Actros, by contrast, turned in a figure of 8 mpg, which ensured it was worthy of very serious consideration.”

Fuel efficiency alone was not sufficient to win the Mercedes-Benz contender a place in the Prestons fleet, though. The operator also factored in the feedback from its drivers, and the quality of back-up it could expect.

“We’ve been dealing with Bell Truck and Van for many years,” continued Mr Preston. “Although historically most of our vehicles have been Swedish-built, we’ve always had a few Mercedes-Benz units, including Approved Used models.

“Bell has a strong presence in the North-East and provides an excellent service, while Mercedes-Benz also gave us every confidence that our trucks will be equally well looked after by other members of its UK Dealer Network should the need arise.

“Meanwhile, the cab comfort and road manners of the Actros have also gone down extremely well with our drivers, even those who have previously been confirmed fans of rival brands.”

Crucially, the acquisition made sound financial sense too. Prestons signed-up to a flexible Agility agreement with Mercedes-Benz Financial Services, which combines low monthly payments with a range of options at the end of the term.

“Our Actros are extremely cost-effective to operate and we’re benefiting from an excellent all-round package, Mr Preston concluded.

The Mercedes-Benz Fuel Challenger programme invites operators to put an Actros to work on their fleet, then compare its diesel consumption with the best of their own vehicles. The truck bearing the three-pointed star has won 90% of the 310 Fuel Challenges completed since the first took place in 2014, achieving average fuel savings of 7.5%. 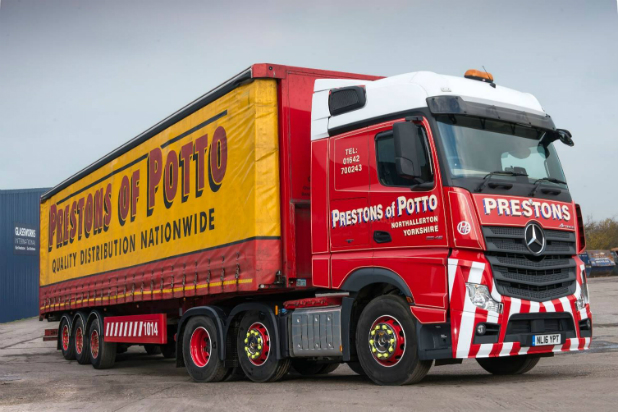