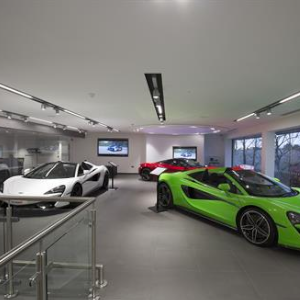 McLaren Manchester has opened the doors for customers in the North West of England at its newly-refurbished facility in Wilmslow following a successful relocation from Knutsford.

McLaren Manchester is considered one of the longest-standing and most successful McLaren retailers globally, having been in operation since June 2011. Managed by Sytner Group, the new showroom features the latest visual identity of the iconic British sportscar and supercar manufacturer and offers over 18,000 square feet of retail space across two-storeys.

The brand’s discerning customers will now be able to specify their vehicles in the most sophisticated environment and enjoy the impeccable levels of customer service that McLaren Manchester is renowned for. The new facility welcomes customers and fans alike and is located at the following address:

2017 was another record year for McLaren Automotive which saw 3,340 cars sold globally and the introduction of new models in each of the established three product families. The 570S Spider was added to the Sports Series, the 720S replaced the 650S in the Super Series while the track-focused McLaren Senna joined the Ultimate Series.

David Gilbert, Managing Director at McLaren Automotive Europe commented: “I would like to congratulate McLaren Manchester on the opening of this highly desirable facility and thank them for their continuous support. They have been an invaluable partner for our brand, and I am confident that this new location will cater to growing demand, while retaining the highest levels of customer service that McLaren Manchester is famous for.”

Jon Crossley, Managing Director at McLaren Manchester, added: “We are excited to move to this exclusive location and welcome new and existing McLaren customers across the North West of England. This elegant location will be a true flagship for the Sytner Group as well as a hub for the business, allowing us to continue delivering the unparalleled service that we are famous for.”