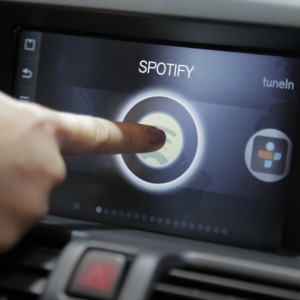 A potential conflict of interests is looming between the advanced driver aids which reduce accident likelihood and in-car gadgets that are disturbing drivers’ concentration.

There are fears that, as cars become more capable of driving themselves, drivers could divert attention from the road to the connectivity options open to them.

Cars can already automatically keep their distance from those ahead, prevent drivers from dangerously changing lanes and brake autonomously to avoid accidents.

Soon they will be able to stop drivers from pulling out at intersections and roundabouts if there is a risk of a crash.

Yet at the same time, cars are becoming just another connected device like a smartphone or tablet computer.

It is also possible to tune into internet radio stations all around the world, and even find and book hotel rooms or tables at restaurants.

Insurance company Allianz claim that 10% of all accidents in Germany are due to driver distraction.

In America the National Highway Traffic Safety Administration wants laws to ban any infotainment task that takes more than two seconds to complete.

Meanwhile, the UK will increase fines for using a hand-held mobile phone while driving to £90, also outlawing eating a sandwich or smoking behind the wheel.

How to minimise driver distraction is a subject which is occupying the thoughts of car-makers and the suppliers who provide infotainment systems.

“Today we can do it for economy driving,” he told headlineauto.

“In future we can maybe monitor it for safety.

“Cars could be fitted with a box which calculates the driver’s ‘risk index’, and the safest could be rewarded with lower insurance premiums.”

Harman, the global market leader for automotive connectivity and infotainment systems, are working on ideas allowing drivers to perform more tasks without any distraction.

Already their systems include advanced voice control which can convert text to speech and vice-versa, with four million cars in Europe expected to have this feature by 2020.

They are also working on gesture recognition, allowing drivers to perform simple tasks with a move of a hand or finger.

The company have also developed a next-generation head-up display which beams safety information, navigation instructions and road signs onto the windscreen in the driver’s eye-line.

“Some of the things which today are below the driver’s eye view need to be brought up,” added Peterlini.

“We need to make cars more attractive and more pleasant places to be in and easier to use, and the key to that is the human-machine interface.

“The question is how to make driving safer, and the technology to enable that is coming.”