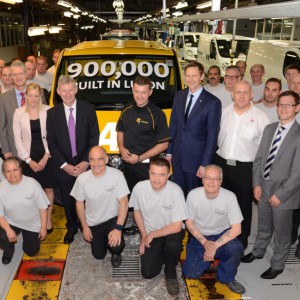 Vauxhall are celebrating a monumental 24hours after manufacturing their 250,000th Astra Sports Tourer and their 900,000th Vivaro-type van.

Vauxhall’s Ellesmere Port site was first to enjoy the Astra milestone, before the Luton facility joined the festivities with their Vivaro landmark.

Duncan Aldred, Chairman and Managing Director of Vauxhall, said: “We are very proud to celebrate these milestones at our UK production facilities in our 110th anniversary year.

“Our hardworking and dedicated workforce at Luton and Ellesmere Port produce vehicles of exceptional quality so it is no surprise these UK-built models are so successful in the marketplace.”

The UK’s best-selling estate car, the Astra Sports Tourer is assembled solely at Ellesmere Port for export across Europe.

Its upper-body structure was 100% engineered by Vauxhall staff based at Millbrook, Bedfordshire, with key dynamic elements tuned for UK roads by the same team.

Production of the current model began in 2010.

The 900,000th Vivaro was handed over to the AA, one of Vauxhall’s biggest customers, with AA Patrol of the Year Tony Rich at the wheel.

Edmund King, President of the AA, added: “We are honoured that this landmark Vivaro is going in to service with the AA.

“Tony is very much looking forward to driving his new van and I’m sure his visit to the plant is one call-out he’ll never forget!”

Both Vauxhall plants have been allocated new products securing production into the next decade.

Both plants employ more than 2,500 people in the Luton and Ellesmere Port areas, with indirect employment of a further 15,000.

Both facilities are significant contributors to the local and national economies with 76% of vehicles built for export.