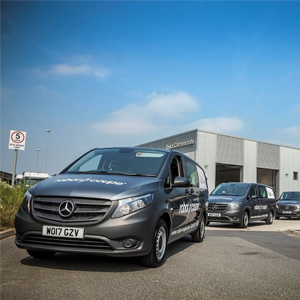 Rygor Commercials laid on a mouth-watering spread for food processor pioneer Robot Coupe, in the shape of a new fleet of Mercedes-Benz Vito vans. The customer collected its latest vehicles from the Dealer Group’s flagship branch in Gloucester.

French-owned Robot Coupe supplies restaurants, caterers and the like with its commercial range of signature food processors, blixers (part blender and part cutter/mixer), vegetable preparation machines and stick blenders, as well as many other items of equipment.

Acquired with funding support from Mercedes-Benz Financial Services, the vans are attractively finished in metallic Flint Grey, emblazoned with the operator’s name and logo. All are 114 CDI models and powered by advanced 2.1-litre diesel engines that offer outstanding economy of up to 44.1 mpg (combined cycle).

Most are crew cab variants with second rows of seats. Supplied in a combination of Long and Compact lengths, they are assigned to Robot Coupe’s field-based chef demonstrators, who visit established and prospective customers to present the company’s products. The sole exception is an Extra-long panel van, which is used by a mobile engineer who resolves any technical issues with equipment in use.

Robot Coupe’s origins in Burgundy, a region renowned for its gastronomy, go back almost half a century, to when Pierre Verdun produced the world’s first food processor. The firm’s UK operation, which has a head office in Isleworth, west London, had been using smaller Mercedes-Benz Citans for the last three years.

Its decision to switch to the Vito was based not only on the vehicle’s extra carrying capacity, but also on the optional availability of the seven-speed 7G-TRONIC PLUS automatic gearbox. This smoothly transmits the van’s 136 hp output to the road via the rear wheels – other Vito variants are available with front-wheel drive.

Robot Coupe Director of Sales Paul Easterbrook confirmed: “The Citans have been very good, but the Vito offers the extra space that allows our chef demonstrators to carry more equipment.

“The second row of seats means we can take fewer vehicles to exhibitions and events, and is also useful when we go out and about with our distributors or customers. The automatic gearbox, meanwhile, makes life at the wheel so much easier for the guys if they’re in stop-start traffic all day.”

Mr Easterbrook was particularly impressed by the latest-generation model when he attended last year’s Mercedes-Benz VanExperience Live event as a guest of Rygor Commercials.

“The Vito is very comfortable and drives incredibly well, more like a car than a van,” he said. “It also knocks spots off the competition in terms of safety. We cover the entire country and each vehicle will be covering upwards of 40,000 miles a year – it’s crucial that we do everything we can to protect our colleagues from injury while they’re at work.”

Mr Easterbrook hailed the “brilliant service” provided by Rygor Commercials, which took back his company’s previous Citans in part-exchange against the new fleet. “I’ve been in sales all my life, and I know how to treat a potential customer,” he said.

“Rygor have it absolutely right. They don’t pre-judge you, so I’ve walked through their door in jeans and a tee-shirt to be greeted by someone who didn’t know who I was, and been treated exactly as I would had I been wearing my business suit.

“They want to build relationships, and will sit you down with a tea or coffee to talk through your requirements. It’s all very professional, and in complete contrast to what happened when I visited a well-known competitor’s showroom – that was one of the worst sales experiences I’ve ever had.”

Mr Easterbrook concluded: “In Mercedes-Benz Vans and Rygor we are working with partners who reflect and complement Robot Coupe’s own, premium brand values. It’s a relationship that we look forward to building upon, as our UK business continues to grow.”

Rygor Commercials Van Sales Executive Scott Westall added: “Our commitment to Setting Standards ensures that customers of all sizes, from the ‘one man band’ with a single van, to the major fleet operator, can rely on Rygor to provide an industry leading quality of customer care.

“Robot Coupe’s new Vito vans looked fantastic as they drove away from our Gloucester dealership, and with after sales support from the Mercedes-Benz Network I’ve no doubt that Paul and his team will be enjoying many miles of comfortable, reliable and cost-effective motoring over the years to come.”