The all-electric Renault Kangoo Z.E.33 is playing a major role in Leeds City Council’s drive to become a carbon-neutral authority and educate West Yorkshire businesses on the significant benefits of switching to electric vehicles. 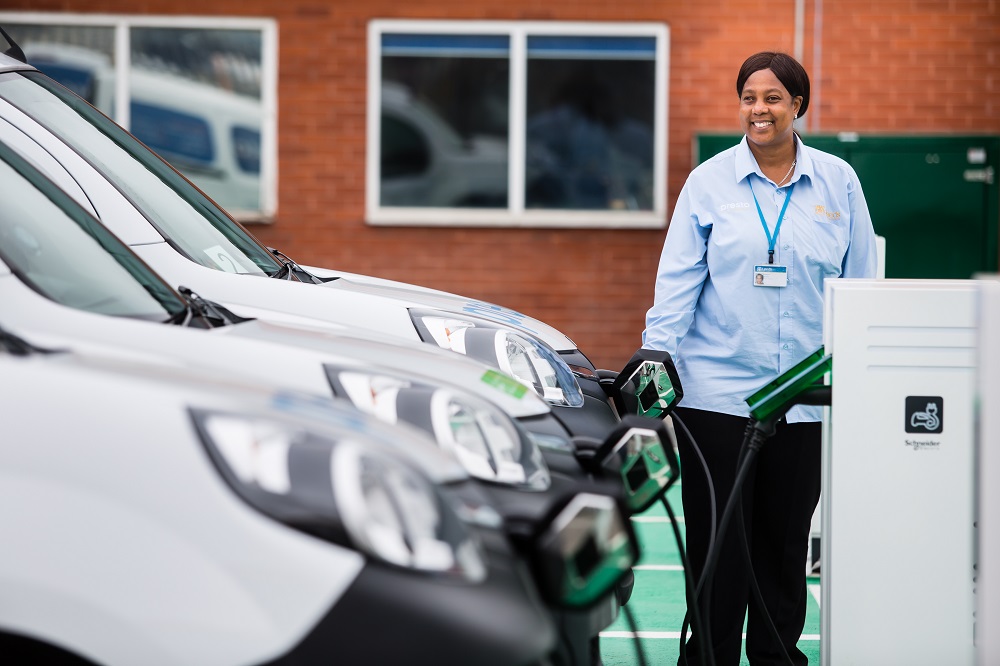 Leeds City Council has taken delivery of 122 examples of the award-winning Renault Kangoo Z.E.33 compact van, with 102 to be used in the delivery of a wide range of services across the city, including property maintenance and civil enforcement, and the remaining 20 to be made available to local businesses through its new EV Trials Scheme.

Via the innovative scheme, which Leeds City Council has launched in partnership with Highways England, West Yorkshire businesses and organisations are able to enjoy a completely free trial of electric vans, including one of 20 Renault Kangoo Z.E.33 for up to two months. Each van will be equipped with telematics devices, which gather journey and charging data, with users receiving a tailored report highlighting the findings and the environmental and potential financial benefits that transitioning to an electric vehicle can generate for their business or organisation. The Renault Kangoo Z.E. will make up nearly half of the 50 electric vans and cars that are available to trial.

As well as their environmental compatibility, Leeds City Council opted for the Renault Kangoo Z.E.33 due to its compact yet versatile dimensions, competitive price and impressive range of 143 miles (WLTP). Availability was another key factor, Renault being able to deliver the order within the timescales required and with no supply issues. The all-electric vans replace several older, less efficient vehicles, with others being added due to the growth and scope of Leeds City Council services. 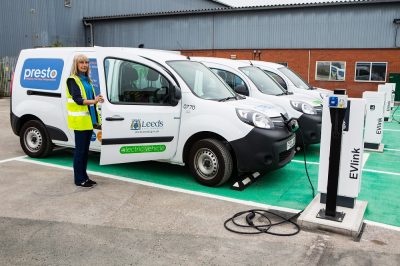 The addition of the Renault Kangoo Z.E.33 to Leeds City Council’s working fleet will boost the amount of all-electric vehicles it uses in the upkeep of the region to over 330. The award-winning light commercial vehicles reinforce the Council’s status as the country’s leading local authority in terms of how many pure-electric vehicles it has on its operational fleet.

The new all-electric Renaults will make a significant contribution to the Council’s ambitions to improve air quality and make its own operations and the city of Leeds carbon-neutral by 2030, allowing them to progress the transition to a low emission fleet. The change to a more efficient fleet is a core part of the Council’s climate emergency strategy, where it aims to lead by example by introducing such actions as purchasing all its electric from renewable resources, replacing gas with waste powered district heating in its city centre buildings and undertaking extensive tree planting on its own land.

The Renault Kangoo Z.E.33. have been supplied in the popular and generously equipped Business specification. As part of the Business trim level, Leeds City Council operatives and those businesses who choose to trial one of the new vans will enjoy a host of features that are designed to aid comfort, safety, connectivity and convenience. These include pre-heating, cruise control and speed limiter, automatic headlights and windscreen wipers, Electronic Stability Control (ESC), Hill Start Assist, Bluetooth, USB socket and DAB radio. Flexible charging options include the ability to recharge 20 miles of driving range in one hour.

Leeds City Council will charge its new vehicles via its existing charge points and is also in the process of procuring a new charging infrastructure.

Councillor James Lewis, Deputy Leader at Leeds City Council, said: “Leeds City Council already operate more electric vehicles than any other local authority and we are a proud signatory of the Clean Van Commitment. Not only are zero emission vans better for the environment and air that our communities breathe, but they are also cheaper to run and maintain than traditional vehicles. We know that switching to electric vehicles feels like it would be a leap in the dark for some, so we’re looking forward to sharing the benefits of these vans free of charge with businesses and charities across West Yorkshire as part of our EV Trials scheme.”

Vincent Tourette, Managing Director, Groupe Renault UK, commented: “We are delighted that the Renault Kangoo Z.E.33 has such a significant role in not only transforming the efficiency of Leeds City Council’s fleet, but that its deployment in the authority’s new EV Trials Scheme will also help many of the city’s businesses experience how electric vehicles can, literally, work for them. We are confident these organisations will be able to see in real-world terms how one of the all-electric Renault Kangoo Z.E.33 can be much more affordable to run, greener for the environment, and offer a better driving experience than other LCVs in the market.”

Available in three body styles (Panel Van, Maxi Panel Van and Crew Cab Van) the Renault Kangoo Z.E.33’s load area stretches up to 4.6 cubic metres, depending on the model. Powered by a 44kW motor with 225Nm of torque and mated to a smooth single speed transmission it’s ideal for urban and open road deliveries, helped in no small part by a potential range of up to 143 miles. The Renault Kangoo Z.E. is priced from £19,380, excluding VAT, after the Plug-in Van Grant.

Renault have been manufacturing its Z.E. range of electric commercial vehicles since 2011. Together with the Renault Kangoo Z.E.33, the line-up also comprises of the large Renault Master Z.E. (available as a Panel Van or Platform Cab) that is ideally suited for last mile deliveries. For details on the Renault Z.E. commercial vehicle range, please visit: www.renault.co.uk/

More information on the Leeds City Council EV Trials Scheme can be viewed at: https://www.leeds.gov.uk/business/support-and-advice/trial-electric-vehicles-at-your-organisation