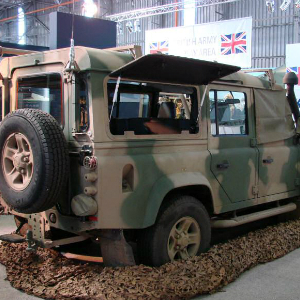 Defence Secretary Michael Fallon last night presented Jaguar Land Rover with a gold award for its active support of the Armed Forces community.  The UK’s leading manufacturer of premium luxury vehicles has a long history of supporting the British military and continues to demonstrate this by meeting commitments made through its Armed Forces Covenant.

Michael Fallon praised the company saying: “The support from these organisations is making a real difference to our Armed Forces community. They are ensuring that the men and women who have done, and continue to do, so much for our nation are treated fairly.

“Whether allowing reservists the time to train, providing jobs or supporting veterans and spouses, these companies embody what the Armed Forces Covenant is about. I am delighted to thank them for their unwavering support.”

Jaguar Land Rover CEO, Dr Ralf Speth, accepted the award on behalf of the company.  He was joined by Matthew Malley, one of the 200 ex-service personnel hired by the automotive manufacturer since 2013.

Commenting on the award, Dr Speth said:  “We at Jaguar Land Rover are immensely proud to have signed up to the Armed Forces Covenant and to be recognised through this award.

“Service leavers are an excellent talent pool for Jaguar Land Rover and our supply chain, with skills that are transferable to an advanced manufacturing environment.  We believe that there is a close alignment between our company’s own values and attitudes and the unstoppable persistence of Armed Forces veterans.”

Matthew Malley explained what the company’s approach means for him:  “I was wounded in action and subsequently medically discharged during my second operational tour in Afghanistan.  I was then told my army career was over, which for me was my life.  After a month-long specially-tailored work placement at Jaguar Land Rover, I got a job with their site services, where I fit right in.  I couldn’t have hoped for a better outcome.”

The work placement programme is run in conjunction with Mission Motorsport and the Ministry of Defence’s Career Transition Partnership (Assist) to help wounded, injured and sick former servicemen and women find a fulfilling second career.  It is just one of the company’s initiatives to boost employment for those leaving the Armed Forces, which also include a training scheme to tackle high unemployment among early service leavers, offering sector-based training, work experience and job interview training.  The tailored programmes build on the company’s ongoing work with the Career Transition Partnership, through which Jaguar Land Rover employs veterans.  Jaguar Land Rover goes even further, encouraging its supply chain to recruit service leavers and recommending candidates to its suppliers.  The company also assists its reservists with paid leave for training and encourages an ex-Forces society, which this year co-ordinated Armed Forces Day and Reserves Day celebrations.

Having been the presenting partner for the inaugural Invictus Games in 2014, Jaguar Land Rover has pledged to support the games in this way again in 2016.  This further demonstrates the company’s commitment to help develop understanding and respect amongst the public for those who serve their country.  To be held in Florida from 8th to 12th May, the second Invictus Games will bring together more than 500 competitors from 15 nations and harness the power of sport to inspire recovery and support rehabilitation of wounded, injured and sick service personnel.

Jaguar Land Rover’s backing for service charities includes Mission Motorsport, Help For Heroes, Rally for Heroes, ABF The Soldiers’ Charity and individual regimental associations.  In October, the company sponsored the Walking With the Wounded Walk of Britain to raise awareness and retraining of wounded veterans leaving the Armed Forces.  This 1,000 mile walk included a stage from Jaguar Land Rover’s Design and Engineering Centre at Whitley, Coventry to its manufacturing facility in Solihull.