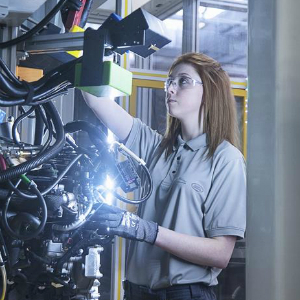 Autocar has recognised twenty female workers at Jaguar Land Rover as some of the brightest and most influential stars in a new Top 100 Most Influential British Women in the Automotive Industry report.

Danella, Land Rover’s first-ever female Vehicle Programme Director, has enjoyed a meteoric rise through the ranks having joined the company as an apprentice 28 years ago. The talented individual has worked across both Jaguar and Land Rover brands, holding various positions within Body Engineering, developing her technical skills and leadership responsibility by bringing some of the company’s most iconic vehicles to life.

Fiona Pargeter was appointed as Jaguar Land Rover’s Global PR Communications Director in November 2012. She previously enjoyed an impressive tenure at the helm of the Land Rover PR team and was responsible for implementing the global PR strategies for the Range Rover Evoque and all-new Range Rover. She is navigating the Global PR function through what is arguably the busiest and most successful period in the two iconic British brand’s recent history.

The winners were announced at the inaugural Great British Women in the Car Industry event on 8 July 2016, which was created to encourage more women into the automotive industry and to address the challenges they face in both entering and progressing in it.

Jeremy Hicks, Jaguar Land Rover UK Managing Director said, “We are absolutely thrilled that so many of our brightest and valued employees have been recognised in these special awards. We pride ourselves on the diversity of our workforce. They are at the forefront of a new age in which gender boundaries are being broken, and we’re incredibly lucky to have such talent here with us at Jaguar Land Rover.”

Autocar editorial director, Jim Holder, added: “We have started this event to stimulate debate about the attractiveness of the industry we love as a place to work for everyone. At present, women are underrepresented in the automotive industry, but it is our belief that a positive focus on the numerous opportunities that a career in the industry can offer can have a real impact in reversing that trend”

Jaguar Land Rover has a wide range of educational initiatives, which aim to get young people excited about careers in the automotive industry. This includes the annual ‘Young Women in the Know’ course for females aged 16-18 which challenges outdated perceptions of manufacturing being unsuitable for women, using female role models to support and encourage students and offering hands-on experience to enrich STEM (Science, Technology, Engineering, Maths) education.

Jaguar Land Rover’s ‘Inspiring Tomorrow’s Engineers’ aims to capture the imagination of the next generation of engineers through Science, Technology, Engineering, Maths activities in schools. In 2015, more than 300,000 young people participated in the programme, of which 135,000 were female. The company’s Women In Engineering Sponsorship Scheme also supports ambitious female engineers wanting to develop their careers by offering placements to females studying engineering degrees.

In 2015, 34% of engineering apprentices hired at Jaguar Land Rover were a result of such initiatives, demonstrating the importance of engaging with the next generation of talent from a young age. Last year, 22% of Jaguar Land Rover’s engineering graduate intake were female, higher than the national figure of 15%, demonstrating the huge progress the business is making to attracting more women into the business.