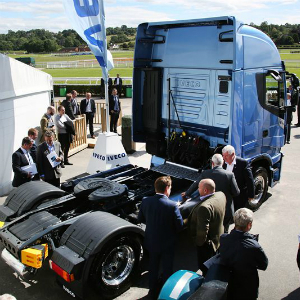 Iveco has presented its vision for the use of Natural Power to senior fleet decision makers representing 80 transport and logistics companies from across the UK – collectively responsible for a parc of more than 10,000 commercial vehicles.

The group attended a series of presentations on Tuesday (5 July) at Uttoxeter race course, less than a month after the international launch of the New Stralis NP (Natural Power) – the world’s first gas-powered heavy truck for long-distance operations.

Nick Pemberton, Director of Iveco’s Truck Business Line, opened the event by setting out the potential for natural gas as a genuine alternative to diesel, citing major benefits including ultra-low emissions, quieter operation and fuel costs which are around a third lower than diesel.

He said: “Gas offers the widest range of opportunities to replace diesel in the commercial vehicle market – it’s no longer a fuel of tomorrow, it’s a fuel of today.”

Where gas vehicles were previously the domain of local authorities and fleets involved in urban distribution, Iveco’s latest product innovations mean they are now a viable solution for regional, national and international transport missions – thanks to a range of up to 1,500km on LNG-powered Stralis 4×2 models. The new 400hp Iveco Cursor 9 Natural Power engine is also the first of its kind in the world to deliver the same power output as diesel in a commercial vehicle application.

Martin Flach, Iveco Product Director, explained: “We have broken down the boundaries that made natural gas a ‘niche’ segment, and we’re seeing the booming development of natural gas refuelling stations across Europe. There literally isn’t a week which passes without a new refuelling site being opened.

“With Iveco’s Natural Power technology we also have the benefit of a simplified after-treatment system, meaning there’s no need for EGR, SCR, AdBlue or particulate filters. Plus the reduced cost of natural gas versus diesel translates directly into a lower total cost of ownership.

“The driving experience is also now on a par with flagship diesel models,” he added. “New Stralis NP will be the first gas-powered truck to feature a 12-speed automated gearbox, to lower fuel consumption and maximise driving comfort. New Stralis NP is also available with our flagship Hi-Way cab, making it the most spacious long-haul gas truck in the sector – without any trade off in payload versus the diesel equivalent.”

Iveco has extensive experience in the commercial vehicle Natural Power market, having delivered more than 15,000 vehicles into service already – including vans, trucks and buses.

In June 2016 Iveco signed a deal to supply 200 New Stralis NP tractor units and 50 Stralis Natural Power CNG rigid trucks to French haulier Perrenot Group. Once deliveries are complete, Perrenot Group will run the largest fleet of Natural Power trucks in Europe, marking an important chapter in the history of sustainable transport. The customer’s decision to adopt a Natural Power fleet was key to it securing business from a major supermarket chain – with its customer keen to decarbonise its logistics and ensure quieter store deliveries.