“Iveco All Blacks Challenge” The Game Is On 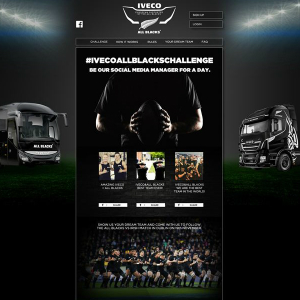 Offline and into the real world: this is the primary aim of the initiative that Iveco is launching for its social media community – the ” Iveco All Blacks Challenge ” will give three lucky users the unique opportunity to become social media managers for the company, which is extremely proud to be renewing its partnership with the New Zealand national rugby union team once again. Dedication, reliability, performance and team spirit are the guiding values of the legendary Kiwi squad; values that are a source of inspiration for Iveco in its day-to-day relationship with clients.

The Iveco All Blacks Challenge is an online competition requiring participants to show and share their idea of team spirit in order to become a full-blown social media correspondent for the Iveco team in the field. Entrants have to show their creativity in a Facebook post depicting the All Blacks team spirit, including the Iveco brand and taking inspiration from the concept of “dream team” on www.ivecoallblackschallenge.com. The posts will be evaluated and selected based on the content’s quality and level of social interaction, with the final decision being made by a panel of Iveco judges.

There will be three winners – one for each stage of the test matches that the All Blacks will be playing in Rome on 12th November at the Olympic stadium, in Dublin on 19th November at the Aviva stadium and in Paris on 26th November at the Stade de France. The winners of the competition will become Iveco’s social media managers and official voice of the Brand for these test matches in Rome, Dublin and Paris. They will work alongside Iveco staff to vividly convey all the emotions they will experience first-hand while watching the undisputed champions of the world rugby scene.