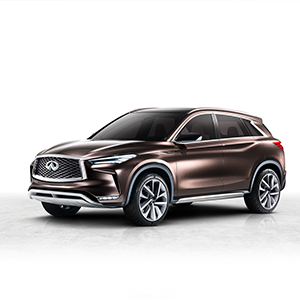 The INFINITI QX50 concept – the brand’s vision for a next-generation premium crossover – makes its Asia debut this week at Auto Shanghai.

Roland Krueger, President of INFINITI Motor Company said, “INFINITI is pleased to debut an SUV concept in the world’s fastest growing segment, here in the world’s largest market. Chinese customers will appreciate the attributes of the QX50 Concept, including its striking design, versatility and advanced technology. The QX50 production vehicles will feature advanced autonomous drive capability and will be the first vehicle in the world to be powered by an engine that can adjust variable compression ratio on the fly, using our ground-breaking VC-Turbo engine.”

Demonstrating how the design of the 2016 QX Sport Inspiration, its conceptual forebear, could be adapted for a future production model, the QX50 Concept confidently articulates INFINITI’s ‘Powerful Elegance’ design language. A ‘cabin-forward’ silhouette combines with muscular lines and flowing surfaces to telegraph its purpose as a dynamic and practical crossover.