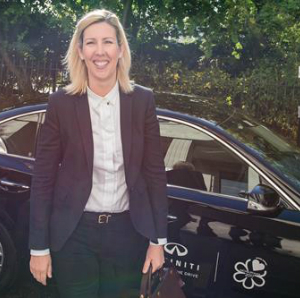 INFINITI announced today a partnership with the MICHELIN Guide, the world’s most renowned guide of quality in hotels and restaurants.

For the first time since the MICHELIN Guide started in the UK back in 2011 the unveiling of the new Michelin-Starred restaurants for Great Britain and Ireland took place at an actual launch event.  Infiniti utilised the event in London today to introduce the new Infiniti Q60 – a powerfully elegant new sports coupé.  The Q60 will underscore Infiniti’s ambition to be a leader in the sports coupé class and is due to be showcased at the Paris Motor Show later in October.

Infiniti also supported the awards ceremony by chauffeuring the top chefs and celebrities to and from the venue in INFINITI style. (Pictured: Clare Smyth – Female Chef Award 2017)

‘These awards are seen as one of the most important dates in the culinary year’, commented Christophe Bouiller Infiniti Marketing Director for Europe, Middle East and Africa.‘Infiniti are proud to honour the chefs recognised by these most prestigious Michelin accolades.  Their passion for innovation, creativity and tenacity are the hallmarks of entrepreneurs.  These are the same characteristics we ourselves identify as being at the heart of great automotive design’ he added.

The launch of the MICHELIN Guide Great Britain and Ireland 2017 in partnership with INFINITI took place at the Institute of Engineering and Technology, Savoy Place, London.

‘Final mile’ delivery specialists in the UK, together with

Goodyear Total Mobility is proud to announce a new