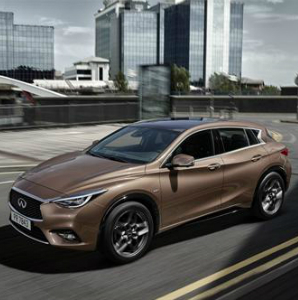 Councillor Paul Watson, leader of Sunderland City Council, alongside Kevin Fitzpatrick, Vice President of the Sunderland Nissan factory, revealed the first part of a £21 million highway through Hillthorn Business Park by opening up a road named ‘Infiniti Drive’ after the premium car manufacturer.

Kevin Fitzpatrick said: “We’re honoured that the stretch of highway has been named after our new premium brand now being built in Sunderland.

“The business park provides a direct route to our plant for companies working with us to build the Q30 as well as our existing models, Qashqai, Juke, Note and the 100% electric Nissan LEAF.

“This will increase our efficiency and help us maintain our long-standing position as the UK’s most productive car plant. We look forward to welcoming new neighbours to Hillthorn in the future.”

This new opening comes just as the new Infiniti Q30 starts to arrive at Infiniti Showrooms across the country and customers begin to take ownership of the British built premium active compact car.

Infiniti Motor Company Ltd. is headquartered in Hong Kong with sales operations in over 50 countries. The Infiniti brand was launched in 1989. Its range of premium automobiles is currently built in manufacturing facilities in Japan, the United States, United Kingdom and China.  Infiniti plans to also expand manufacturing into Mexico by 2017.