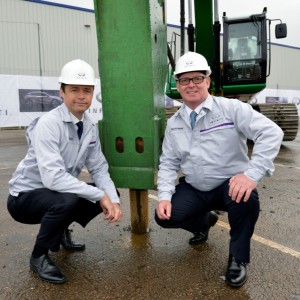 Designed for the Q30 body assembly and final assembly, the plant will cover 25,000sq/m of new production space, with construction and facility installation set for completion by the vehicle’s 2015 launch.

The move – which should create around 1,000 new jobs – means Infiniti are the first new car brand to be manufactured in the UK on such a scale for 23years.

The groundbreaking ceremony was performed with the aid of a specialist digger provided by construction partner Sir Robert McAlpine, indicating a relationship dating back to the establishment of the Sunderland Plant in 1984.

Mr Mann said: “Securing the Infiniti Q30 for production at Sunderland was a tremendous achievement by the workforce and reflects the quality levels which they have reached.

“The existing Sunderland plant is already the largest in UK automotive history and this £250million investment will move the plant even further up the value chain and reconfirm our commitment to their future.”

Mr Knight added: “This is a significant step for the Infiniti brand as we establish manufacturing here.

“The design centre in Paddington, the Technical Centre in Cranfield and the ongoing partnership with the Infiniti Red Bull Racing team in Milton Keynes testify to our strong link with the UK.

“Our investment here amplifies the brand’s presence in Europe, one of the key markets for Infiniti, but provides clear intent as we gear up for sales of the compact premium Q30 in 2015.

“Infiniti is committed to growing its product offering over the coming years as we challenge the traditional premium offerings.”