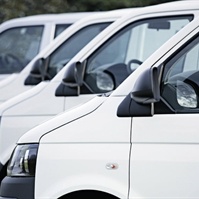 The car derived van (CDV) sector once again dominated the auctions, with 42% of all vans sold in April coming from these popular models.

However, within the small panel van sector, the second highest volume sector during April, average age fell from 74months to 68months and average mileage increased from 78,832 to 87,925 over the month.

This increase in younger vehicles at auction had a positive impact on values for the segment, as they rose from £4,131 to £4,444.

Matthew Davock, Head of LCV at Manheim, said: “The auction halls up and down the country have remained healthy during April, but the Bank Holidays and the Easter weekend did have an impact on the footfall at auction centres during the month.

“However, this was offset by the fact that online performance remained very strong and we have seen some auctions sell up to 30% of the vehicle stock via Simulcast, our online bidding technology.

“Despite the slight decrease in buyers at auction during April, many of the people that I have spoken to are reporting that the first three months of 2014 have been the strongest that they have seen in five years, with many of them keen to stock up and replace sold units.

“When comparing the year-on-year values, 2014 vehicle prices have remained very strong and we continue to see a great appetite in the market for older age, older mileage stock.”

James Davis, Head of Commercial Vehicles at Manheim, added: “Our latest monthly analysis clearly shows that the traditional seasonal slowdown around the Easter weekend has been over-ridden by price increases.

“However, it is important that we look far deeper at stock profile, as there has been a significant reduction in volume during April, along with a contribution of older vehicles at auction, as these older, lower mileage vans are good news for buyers because they are an attractive price point.

“As I predicted last month, it would appear that the watershed moment in the wholesale market has occurred and the number of older used vans entering the market will now begin to decline gradually.

“Daily rental companies are already predicting an increase in stock levels over the coming months, as lead times on new stock delayed the replacement in quarter two.

“This increase in good quality, younger vehicles into the market will have a positive impact on the average selling prices as we enter the summer.”