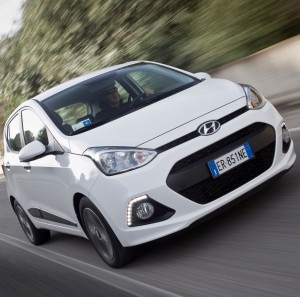 VALUE: Hyundai i10 due early next year

Hyundai are citing improved productivity as the prime reason why the new i10 will offer buyers better value for money.

The new model, which goes on sale early next year from £8,345, is bigger, roomier, safer and, in most cases, better equipped than the same-priced outgoing model.

While the base model will no longer have air conditioning as standard, Hyundai are marketing the i10 as an ‘A to B’ car – A-segment pricing with B-segment facilities.

European versions of the new i10 will be built at Hyundai’s plant in Turkey, where capacity has been increased from 120,000 units a year to 200,000.

India, where the i10 is currently produced, will build a domestic version of the newcomer, called the Grand i10, with the platform also used for the next Kia Picanto in time.

Tony Whitehorn, President and CEO of Hyundai UK, claims that the move gives the Hyundai-Kia group the economies of scale which make zero or minimal price increases on the new i10 feasible.

“We are in the top two or three in the A-segment – my aim with the new model is to sell about 20,000 next year and extend the appeal of the car,” said Mr Whitehorn.

“This is a fantastic time to buy a brand new car.

“There are some fantastic deals throughout the industry, and we are part of that competitive set.

“Consumer incentives have increased by around 20% year-on-year.”