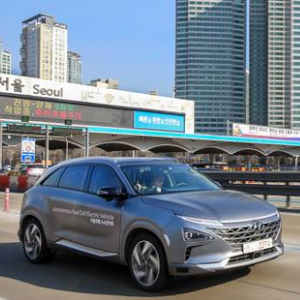 A fleet of Hyundai Motor Company’s next generation fuel cell electric vehicles have succeeded in completing a self-driven 118 mile journey from Seoul to Pyeongchang.

This is the first time in the world that level 4 autonomous driving has been achieved with fuel cell electric vehicles.

Until now, autonomous driving has been demonstrated only on selected sections of Korean domestic roads and at a limited speed, this is the first time autonomous vehicles have operated on public highways at 110 km/h, the maximum speed allowed by law on Korean highways.

Three Hyundai vehicles completed the journey, all based on NEXO, Hyundai’s next-generation fuel cell electric vehicle which is scheduled to be released in Korea next month. All vehicles were equipped with level 4 self-driving technology, as defined by the SAE international standards and equipped with 5G network technology.

The demonstration took place in Seoul on Feb 2nd, with the ‘CRUISE’ and ‘SET’ buttons being pressed on the autonomous-driving steering wheel of each vehicle, at which point the cars immediately switched to self-driving mode and began the 118 mile journey to Pyeongchang. Entering the highway, the vehicles moved in response to the natural flow of traffic, executed lane changes, overtaking manoeuvres and navigated toll gates using Hi-pass, South-Korea’s wireless expressway payment system.

Building on the successful demonstration of Hyundai’s vehicles which drove autonomously in Las Vegas during the Consumer Electronics Show (CES) early last year, the cars feature a number of advanced technologies that enable them to recognise surrounding vehicles more accurately and make better judgements at junctions and navigate through toll gates by accurately calculating the toll gate’s width and position. The vehicles are also able to pinpoint their position on a map by using external sensors fitted for situations when the GPS signal was interrupted, such as going through underground tunnels.