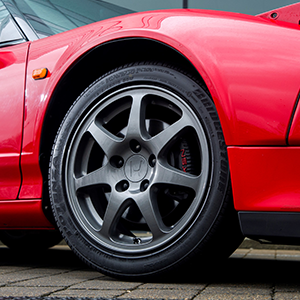 The legendary Honda NSX has been shortlisted for a prestigious award recognising the cars that changed the world.

The brand’s affordable supercar, which rewrote the sports car rulebook when it was first launched in 1990, is one of 39 game-changing models in the running to be named Autocar Readers’ Champion.

The winner, which will be announced at the Autocar Awards in May, will be decided in a public poll.

Philip Webb, head of cars at Honda (UK), said: “The launch of the Honda NSX was not only a major landmark in the history of our brand but also in the evolution of the modern sports car.

“It was truly ground-breaking at the time and carved itself a special place in both automotive history and the hearts of car enthusiasts everywhere.

“We’re delighted Autocar has recognised the impact the original NSX had on the motoring landscape by shortlisting it for this award.”

First launched 27 years ago, the NSX, or New Sportscar eXperimental, was the first mass produced car in the world to feature an all-aluminium lightweight body.

It’s heart-stopping performance came from its outstanding 3.0 litre V6 and was enhanced by advanced aerodynamics.

With styling inspired by the cockpit of an F-16 fighter jet, the model’s legendary status was boosted by the fact three-time F1 champion Ayrton Senna was heavily involved in its development.

Following in the revolutionary footsteps of the original, a new and equally exciting hybrid-powered Honda NSX was launched last year.

It features a hand-built 3.5 litre twin-turbocharged V6 engine, mid mounted to an aluminium chassis and mated to a nine-speed Dual Clutch Transmission for instant response. This can propel the supercar from 0 to 62mph in under three seconds and on to a top speed of over 190mph.

To register your vote for the Honda NSX visit: AutoCar