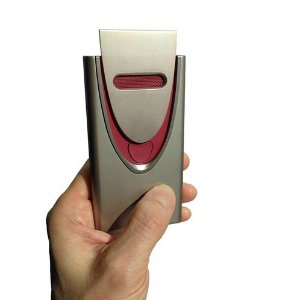 Hitachi and Honda announced they have developed a prototype of a portable alcohol detector that can be integrated into a smart key. The prototype is tamper-resistant as it can distinguish human breath from alternative gases.This device is capable of distinctively detecting the saturated water vapour from human breath and accurately measures alcohol levels within three seconds. Hitachi and Honda jointly collaborated on developing the technology in an effort to create the ideal alcohol detector.

The two companies also developed a system that can show the alcohol level measured by the detector on a vehicle’s display panel. The system can become an ignition interlock to stop a vehicle from starting when it detects that the driver is under the influence of alcohol.

The prototype has distinct advantages over other ignition interlocks. Currently, other systems require drivers to perform the test from the driver’s seat once inside a vehicle. This device enables drivers to measure their alcohol level from anywhere prior to entering their vehicle,thus reducing the temptation to drive. In addition, it can confirm that the applied gas is human exhaled breath and can detect the level of alcohol present simultaneously, an enhancement over currently available devices. Advancements like these will contribute to reducing instances of drink driving.

The prototype has the following features:

(1) Miniaturised sensor technology with the ability to discern human breath

Hitachi has developed sensor technology that can detect the saturated water vapours from human breath with a high degree of sensitivity. The sensor consists of an oxide insulator1 sandwiched between electrodes. Breath is absorbed by the insulator and electric current flows between the electrodes.

This sensor improves upon previous similar devices by being able to detect alcohol to a high degree of accuracy, despite the sensor area measuring just 5mm square.

In compliance with Japan’s regulations related to drink driving,the device has an improved ability to measure the ethanol concentration from exhaled breath.  The ethanol concentration is measured*2 by three types of semiconductor gas sensors to detect ethanol, hydrogen and metabolised acetaldehyde in breath after drinking. This method improves accuracy threefold*3 compared to devices that only use an ethanol sensor for measurement. The device is also capable of measuring as little as 0.015 mg/L (an ethanol concentration) compared to 0.15 mg/L of the alcohol which constitutes being “under the influence of alcohol” and a charge of drunk driving in Japan.

(3) Integrated for use with current smart key technology

Hitachi and Honda are aiming to commercialise the technology through effectively collecting data from future validation tests.

The prototype and research findings will be presented on April 12 –14,at the SAE 2016 World Congress and Exhibit,which will be held in Detroit,Michigan,USA.

*1Oxide insulator: an insulator with metal-oxide such as glass or ceramic.

*2 The concentration is calculated by differential evolution algorithm. The algorithm is one of the numerical analysis methods to obtain best solutions for plural unknown parameters in equations.