In Europe, Group registrations rose 4.9 per cent in a market that grew by 1.4 per cent, with 397,097 vehicles registered in the third quarter. The Group took a 9.9 per cent share of the European market, up 0.3 points.

The Renault brand posted growth of 2.9 per cent, buoyed by the launch of New Koleos and the success of ZOE Z.E. 40. Clio is Europe’s second best-selling vehicle, while Captur is the number-one crossover in its segment.

Renault continues to lead the way in the electric vehicle segment, with 7,697 vehicles sold in the third quarter. ZOE registered 6,665 sales, an increase of 67 per cent.

The Dacia brand reported a 10.3 per cent rise in sales, driven primarily by the performance of Sandero (+12 per cent).

Outside Europe, the Group is continuing to consolidate its position with the success of new models: sales rose 13.5 per cent in a market that expanded by 5.5 per cent.

In Eurasia, sales rose 24.3 per cent in a market that grew by 15.5 per cent. The market share of the Group, which now includes the Lada brand, increased by 1.8 points to 24.6 per cent.

In Russia, the Group’s second biggest market in volume, sales jumped 22.9 per cent (at constant scope, including Lada). Buoyed by the success of Lada Vesta, Lada Xray and Renault Kaptur, the Group increased market share to 28.2 per cent, a rise of 1.2 points.

In Turkey, sales surged by 40.6 per cent. The Group increased market share by 3.5 points to 18.8 per cent on the back of the success of New Mégane Sedan, which totalled over 8,412 registrations in the third quarter.

In Asia-Pacific, Group registrations rose 21.1 per cent in a market that grew by 4.7 per cent.

In China, the Group increased sales by 123.6 per cent, with 16,807 vehicles sold during this quarter.

In South Korea, Renault Samsung Motors sales fell by 8.2 per cent owing to the lack of new model in a fiercely competitive market. This fall follows strong growth in 2016 with the launch of SM6 and QM6.

In the Americas region, sales rose 14.0 per cent in a market that expanded by 7.1 per cent. The Group increased its market share by 0.4 points to 7.3 per cent. The Group is continuing to reap the full benefits of the recovery of the Brazilian market, which expanded by 14.6 per cent. Registrations jumped 24.8 per cent and market share rose to 8.5 per cent (+0,7 points), buoyed by strong sales of the new models, Captur and Kwid. Launched in July, Kwid has already totalled over 13,600 sales.

In Argentina, where the market expanded by 18.5 per cent, Group registrations rose 7.7 per cent pending the Kwid start of sales.

In the Africa, Middle-East, India region, Group registrations fell by 1.3 per cent in a market that grew by 4.2 per cent. In India, sales fell by 20.7 per cent on third-quarter 2016, pending the launch of Captur in early November.

In Iran, the Group confirmed the trend noted in first-half 2017 with a 28.1 per cent increase in deliveries, on the back of the success of Tondar and Sandero. The Group increased its market share by 0.8 points to 10.5 per cent.

Automotive excluding AVTOVAZ revenues totaled €10,974 million (up 9.9 per cent). The volume effect (+2.7 points) is still benefiting from the on-going recovery in the Russian, Brazilian and Turkish markets, as well as the good sales momentum in Europe. The combined effect of price and mix is impacting positively for 2.2 points. The increase in sales to partners contributed 4.8 points to the revenue growth, reflecting the positive momentum in sales of vehicles assembled (notably in Europe with the ramp-up of Nissan Micra production) and in our CKD1 activity in Iran and China. The “others” effect (+2.6 points) is mainly explained by the robust performance of used vehicles and spare parts activities. The currency effect turned negative at -2.4 points, mainly due to the strengthening of the Euro versus a basket of currencies (notably Argentinean peso, Turkish lira and Korean won).

Sales Financing (RCI Banque) posted revenues of €610 million in the third quarter, up 9.5 per cent on 2016. The number of new financing contracts increased by 14.0 per cent. Average performing assets rose 18.2 per cent to €40.1 billion.

AVTOVAZ revenues amounted to €634 million in the third quarter (entity not fully consolidated in 2016).

Within this context, and including AVTOVAZ, Groupe Renault is confirming its guidance: 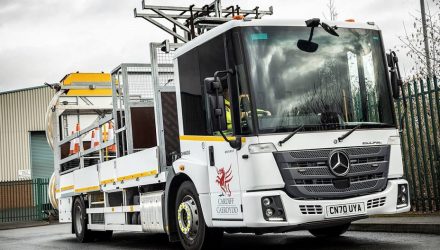 Cardiff Council has added two Mercedes-Benz Econic impact protection vehicles for use by its highways team. Based on low-entry 18-tonne Econic chassis, the vehicles are purpose-designed and

Following further easing of lockdown restrictions in England and

For sale – a mint 70 year-old Morris that