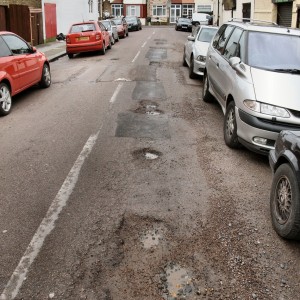 The government are investing £30,000 in the development of an innovative smartphone application to report potholes.

Department for Transport’s (DfT) pledge will enable the Cyclists’ Touring Club (CTC) to revamp their ‘Fill That Hole’ website and develop a new Android app.

More than nine million iPhone users can download the website’s current app to report potholed roads to their councils.

However, the new app – expected to be ready next month, ahead of the ‘pothole season’ – could boost that figure to more than 26million.

“At best they are an irritation but at worst they can damage vehicles and pose a serious danger to cyclists.

“That is why we want people to tell councils where to find them so they can fill them in.

“This app means more people are going to be able to report potholes more easily.

“Filling potholes in quickly is only one half of the story.

“Research has also shown a long-term approach to road maintenance, rather than patch and mend, can save councils and taxpayers money and potentially save lives thanks to better road conditions.”

CTC originally developed their app for cyclists, but it is now used by all types of road user.

The app sends local authorities up-to-the-minute information about potholes which the council may not otherwise know about, allowing them to identify trouble spots needing action.

In the past year, around £23.8million was paid in compensation by local authorities across England due to the poor condition of their roads.

Gordon Seabright, Chief Executive of the CTC, said: “CTC has been working to ensure roads are safe for cycling since our foundation in 1878.

“We are delighted to have the government’s support for our ‘Fill That Hole’ website and app, which are already highly effective ways for road users to get potholes filled.

“This partnership with the DfT will enable us to provide this free service to far more cyclists and other road users.”

Image courtesy of Alan Stanton, with thanks.