How good is the Hilux – ask a farmer 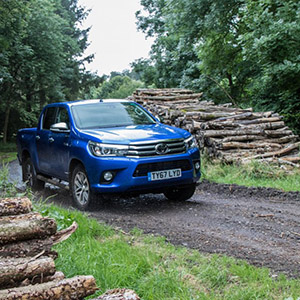 If you want to know just how reliable, hard-wearing and capable a machine the Toyota Hilux is, you can’t do better than ask the people who drive them day-in, day-out. That’s what makes Hilux’s latest award, Professional Pick-Up and 4×4 magazine’s Working Pick-Up of the Year, announced today, all the more relevant and rewarding.

Unlike many other awards, these honours are determined by people who rely on their pick-ups and all-wheel drive machines every day for their business. A more rigorous and practical judging panel would be hard to find, representing a wide range of professions and jobs including farming, fencing, plant hire, builders, road gritters, estate managers, agricultural suppliers and a professional hunter.

Hilux had to prove its mettle in a series of driving scenarios, including driving off-road and towing, in a test programme at the Carlton Towers Estate in Yorkshire.

Speaking for the team of 12 judges, Liam Campbell, Professional Pick-Up and 4×4 founder and editor, said: “The Hilux has long been regarded as the no nonsense workhorse, and this continues into the latest generation with its fantastic residual values, a 3.5-tonne towing capacity and its highly regarded build quality and durability. However, it didn’t just impress in terms of productivity and capabilities; the jury also made a note of its comfortable ride and handling on the road.”

James Clark, Toyota Press Relations Manager, said: “Hilux couldn’t hope for a better commendation than to be named the best in its class from the people whose livelihoods depend on a vehicle they can rely on to do the job, every time. With each new generation of Hilux we have made advances in performance, comfort and safety, but never at the cost of its fundamental abilities as a tough, robust machine that can tackle the toughest working conditions.”