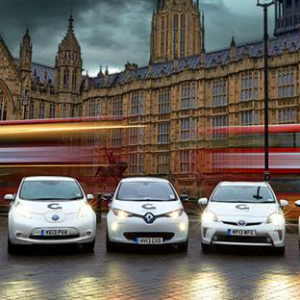 A government initiative is likely to start having a “nudge” effect on fleet adoption of electric vehicles, says Arval, a leading vehicle leasing and fleet management company.

The first Go Ultra Low cities – Nottingham, Bristol, Milton Keynes and London – were chosen in January to share £40 million of government funding to encourage EV uptake and are now starting to put their schemes into effect.

“Some of the ideas being implemented by the Go Ultra Low cities are really interesting. While they are not radical, they are intelligent and provide genuine benefits to EV drivers which are likely to have an effect on fleet decision making.

“The Milton Keynes scheme to make public parking free for EVs, which came into effect in July, is a good example. Anyone who has ever worked in Milton Keynes knows that most of the parking is publically operated and quite expensive, so free parking is a genuine benefit.

“Similarly, the Nottingham and Derby scheme to offer EVs access to bus lanes is something that costs the council little but gives a genuinely useful advantage to EV company car drivers or fleet operators. If you could knock 10 minutes off your commute every day or reduce the travelling time between jobs for commercial drivers, then this is another positive element for those people and organisations that are starting to consider an EV.”

David said that the schemes were not designed to encourage overnight, mass adoption of EVs by fleets but would instead be one of a number of factors in their favour for fleets and drivers considering EVs.

“We are at a stage where there is widespread interest in EVs but relatively few fleets have bitten the bullet and actually acquired any. However, momentum is building. There is growing awareness of how to operationally manage the limited range of EVs and the circumstances in which they are most appropriate for businesses.

“Vehicles like the Tesla Model S have had an impact on EV perception because of their range. The moment that increased range technology begins to filter down to more mainstream areas of the fleet sector, there are a lot of people who we believe will not hesitate to go EV.

“The Go Ultra Low initiatives are part of this thought process. They provide a ‘nudge’ for fleets and drivers to change their thinking and their behaviour. It will be very interesting to see the degree of effect that they have and we are supporting our customers who operate within those cities to watch for developments.”