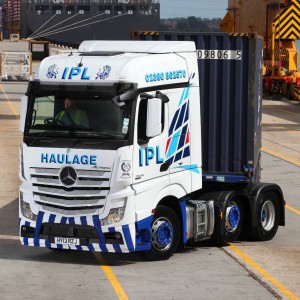 Container transport specialists IPL Haulage are hoping to slash fuel costs after veering away from their established supplier to bag their first Mercedes-Benz trucks.

Two further identical units will be delivered by the same dealer in January.

Working alongside the Actros pair are another 22 tractor units, all of which are by the manufacturer that IPL have relied on exclusively since 2004.

Ian Percival, Managing Director of IPL Haulage, said he made the decision after Pentagon supplied his business with two Actros demonstrators.

“I allocated one to a very good driver, and the other to a guy who’s less experienced,” he said.

“It’s difficult to make accurate comparisons, because our work is so varied.

“But the good driver achieved 9.5mpg, which is very encouraging given that our fleet average is 8.75mpg.

“The second driver didn’t do quite as well but still returned 9.1mpg, an improvement of almost 0.4 mpg.

“Having also heard positive reports from other operators, I’m optimistic that these New Actros are going to prove very economical in service.

“A little bit of competition can be very healthy.

“And given that an improvement of three-quarters of a mile per gallon translates into an annual saving in diesel of around £6,000 for a single vehicle, there’s clearly all to play for as far as Pentagon and Mercedes-Benz are concerned.”

Mr Percival said he had also been won over by the striking appearance of the Actros.

“It’s undoubtedly the best looking truck on the road right now – very modern and with real presence on the road,” he added.

“But it doesn’t matter how good the truck is, it’s the whole package that’s crucial.

“Pentagon has a good reputation in this part of the world, so I’m also looking forward to putting its backup to the test.”

UK car production in 2021 fell -6.7% to only 859,575 units, according to figures released today by the Society of Motor Manufacturers and Traders (SMMT), the worst total since

WTW and Thatcham Research have announced a new partnership

WTW and Thatcham Research have