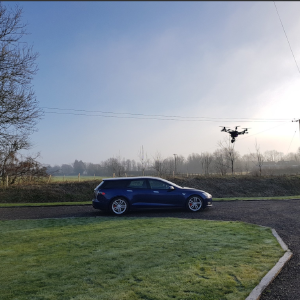 A phenomenal highlight that would add to the experience of any motor show comes to the 2018 London Motor Show for a world-first showing.

The London Motor Show has announced that it will host the world’s first Tesla-based production shooting brake at this year’s event. If you’re not up to speed with British car lingo, a shooting brake is an estate car. If you’re still confused, the pictures should help.

And finally… the bit you’ve all been waiting for. A few of you doubted it was even real..captured earlier today the moment that @TeslaTed very own P90D-SB connected to the #ElonMusk network became visable and moved #theteslashootingbrake #british @BBC_TopGear @FullyChargedShw pic.twitter.com/ZRCiEAclUR

The car is being showcased by carbon fiber coachbuilders QWest. The conversion project used a Tesla Model S 90D.

“The Confused.com London Motor Show reports that it is set to be bigger and better than ever — with more cars, more exhibitors and more activities taking center stage from 17-20 May.”

The London Motor Show news release continues: “Carbon fiber coachbuilding specialist QWest will touch down at the ‘automotive event of the year’ from 17-20 May armed with its latest creation, which is based on the reputable Model S (90D). QWest’s Shooting Brake carries over the standard Model S’s 0-60mph time of just 2.8 seconds. Its visible carbon fiber on the tailgate, rear roof section and D pillar mark it out against the standard car while adding strength and reducing weight.

“It’s 7.4 cubic feet larger than the standard 90D, but is actually 12kg lighter thanks to QWest’s use of carbon fiber. It was developed to be more than simply a conversion – it’s an integrated design and elegantly engineered solution that complements the car it’s based on.”

Alec Mumford, Chairman of The Confused.com London Motor Show, added: “This year’s London Motor Show is set to welcome more world firsts than ever before in our new home, and we’re delighted to have the world’s first Tesla-based Shooting Brake coming to the capital. This is a serious feat of engineering using the very latest technology, making it perfect for our enthusiastic audience. This isn’t a car to be missed at the show!”

“After outgrowing Battersea Evolution – where a record-breaking 25,000 spectators passed through the gates in 2017 – the Confused.com London Motor Show has relocated to the iconic ExCeL for 2018.”