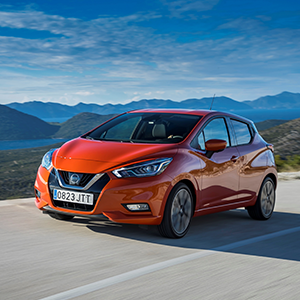 The first customers to order the all-new Nissan Micra are taking delivery of their cars this week.

The new Micra’s roll-out to Nissan retailers across Europe began at the start of 2017. By the end of March approximately 6,000 vehicles will be on forecourts and in showrooms, for onward delivery to customers.

The keenest buyers – those who placed their orders back in December – will be collecting their new Micra from tomorrow.

Paul Willcox, Chairman, Nissan Europe, commented: “The revolutionary fifth-generation Micra sets new standards for European customers buying in the core B-hatchback segment. It delivers an agile and confident drive, and with thousands of Micras now at Nissan retailers across Europe, consumers can find out just what a revolution this car is for themselves.”

The Nissan range is strengthened and widened by the arrival of the all-new Micra. It returns Nissan to the heart of the B-hatchback segment with an outstanding new product which has been designed, engineered and manufactured for Europe. The car is built at the Flins factory in France, as part of the Renault-Nissan Alliance.

Longer, wider and lower than ever before, the new Nissan Micra is quite simply a revolution. It is a radical progression from the model it is replacing, and from the trio of highly successful superminis which date back to the Micra’s debut in Europe 34 years ago.

Key to its appeal is the car’s athletic and expressive exterior design, which moves the Micra name plate in a daring new direction. The contemporary look and premium feel continues inside, with a high-quality cabin that boasts two-tone soft-touch materials as standard across the range.

The new Nissan Micra is also a technology leader, with a number of features which are not only new to the Micra but new to the segment. These include Intelligent Lane Intervention, a safety system which smoothly corrects the Micra back on to the right path should it be required.

Also unique is the BOSE Personal audio system, which features speakers built into the driver’s head rest for an exceptional 360° sound experience. The new Micra is available with a wide range of personalisation options, modifying the exterior and interior with premium components in a variety of contemporary colours.