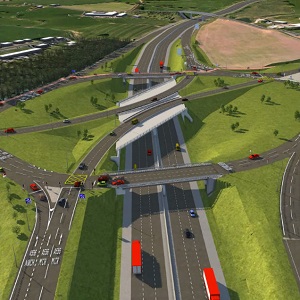 Plans for a £50 million investment in one of Cheshire’s busiest motorway roundabouts will take a step forward next month when detailed proposals for the M6 Junction 19 improvement project are presented at 2 public exhibitions.

It was revealed in June that three quarters of drivers had backed the idea of a new bridge across the middle of the roundabout – where the M6 meets the A556.

Highways England has now refined the idea and, next month, road users and residents will get a chance to view the proposals before statutory processes begin later this year – paving the way for a start to construction.

“These information events are a great way for members of the public to view our updated plans and come to talk to us about this scheme. We are keen to present the plans to the public again before we get the statutory processes underway and look to start by March 2020.”

The new bridge through the roundabout and over the M6 will provide dedicated link roads between the northbound M6 and the new northbound A556 Knutsford to Bowdon dual carriageway as well as the southbound M6 onto the southbound, local, A556 road towards Northwich

As well as the new bridge the proposals include:

The 2 public information events will take place at Mere and Tabley Community Club, Chester Road, Mere, Knutsford, WA16 0PU between 2pm and 8pm on Thursday 3 May and between 10am and 6pm on Wednesday 16 May.

More information on the project, including a leaflet, is available here: http://roads.highways.gov.uk/projects/m6-junction-19