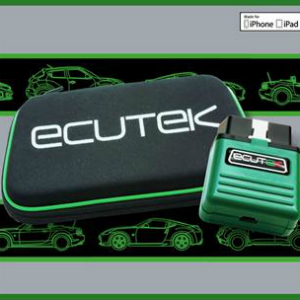 West London vehicle tuning specialist EcuTek is proud to announce the release of its latest product, an innovation that connects your iPhone/iPad to the engine ECU of a variety of high-end Japanese performance vehicles.

Since its foundation in 2001, EcuTek has perfected its approach to vehicle tuning, retaining the vehicle’s factory ECU and basic engine management code but adding huge scope for adjustment, many modification options and entirely new features. It does so with a highly accessible and intuitive software package with which authorised tuners can create the most effective and efficient performance calibrations.

As a supplier to high-profile companies such as Cosworth, Mitsubishi, Prodrive and Subaru, EcuTek is a trusted force in the world of engine-management tuning, and famed for providing a tuning product that doesn’t require a costly aftermarket ECU and, more importantly, doesn’t sacrifice the manufacturer-developed safety features and high quality of the original engine management.

The new ECU Connect Vehicle Interface is a compact module that plugs into a car’s OBD-II diagnostic port to bring cable-free communications to the palm of the hand – quite literally, as its free companion app installs on the iPhone or iPad, allowing that mobile device to communicate with the vehicle ECU over Bluetooth via the module.

This enables functions such as fast logging (up to 200Hz) of data streamed live from the engine, the ability to read and clear ECU trouble codes (not only from the engine ECU but from other sub-systems, depending on the vehicle) and an ECU Reset function that can clear existing learnt values – all features normally only accessible through the car-makers’ own diagnostic tools.

But it doesn’t stop there, as ECU Connect includes a Performance Analyser that will time defined  performance runs (0-60mph, standing quarter mile etc.), will archive the results and can even share them with other people by e-mail or Facebook. ECU Connect also includes a built-in Dealer Locator to direct you to any of EcuTek’s 1,000-strong global network of authorised tuners.

A New Partner for EcuTek RaceROM

RaceROM is an EcuTek-developed suite of custom feature enhancements for the factory ECU. These offer more tuning options and greater functionality, allowing the tuner to write powerful, feature-packed calibrations to meet the requirements of their customer.

Examples of EcuTek’s RaceROM custom features include: the ability to run on ethanol (Flex-Fuel is also an option); Flat-Foot Shift, which lets you shift gears without lifting off the accelerator; adjustable Launch Control to maximise traction on full-throttle standing starts; Valet Mode, which can be engaged to limit performance if your car is being driven by somebody else… and many more.

ECU Connect has been created to work with RaceROM, so enabling EcuTek tuners to add even more functionality to RaceROM-developed calibrations. Using the app, the driver can make certain adjustments on the fly, such as to Launch Control characteristics, turbo boost, valve timing and more, and they can switch between different calibrations.

Most modern performance cars include numerous hidden settings that can only be accessed by official main dealers, but now ECU Connect can provide that access. On the Nissan GT-R this means you can make fine adjustments to the dual-clutch transmission, you can set up engine idle learning, and you can even reset the tyre pressure monitoring system (TPMS) after new pressure sensors are fitted (for which an additional TPMS hardware tool is required).