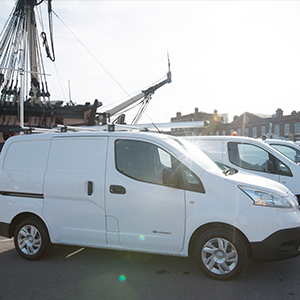 Portsmouth Naval Base will be welcoming a fleet of a different kind this week with the arrival of the first batch of 48 electric Nissan e-NV200 vans to support the Royal Navy’s operations at the base.

The electric vehicles have been ordered by BAE Systems on behalf of the Naval Base Commander as part of his commitment to investing in green energy on the naval base. The vehicles will be used by BAE Systems’ personnel to transfer stores, engineering and load-lifting equipment from warehouses within the Naval Base.

The all-electric Nissan vans will reduce carbon dioxide emissions from the naval base’s vehicle fleet by around 40 per cent. The agreement, which also includes 59 standard diesel vehicles, will save the Ministry of Defence (MOD) an estimated £360,000 in fuel and other costs over the duration of the contract, which runs for two years with an option to extend into a third. To support the new electric fleet and as part of BAE Systems’ commitment to reduce emissions and increase energy efficiency across the naval base, 26 charging points and 28 designated parking bays for electric vehicles are being installed.

BAE Systems’ agreement with Nissan and fleet management specialists Lex Autolease reiterates the company’s commitment to delivering value for money. It also supports the MOD’s drive to create a more modern and energy-efficient naval base, equipped with innovative technology, fit for the 21st century.

Portsmouth Naval Base Commander, Commodore Jeremy Rigby, said: “I am very pleased to welcome the addition of these 48 electrical cars to our fleet in the naval base. It’s great for the Royal Navy, great for Portsmouth and great for the environment.”

Ian Anderton, Integrated Delivery Director at BAE Systems, added: “We have worked closely with Lex Autolease and Nissan to introduce this new fleet that makes a significant reduction to carbon dioxide emissions and respects ours customer’s need for value for money. Replacing nearly half of the transport fleet at the naval base reiterates the company’s commitment to creating more energy efficient ways of working and adopting the latest technologies.”

Tim Porter, Managing Director of Lex Autolease said: “While adoption of ultra-low emitting commercial vehicles in fleets is on the rise, in part due to a continued reduction in running costs, it’s when we work with forward-thinking organisations such as BAE Systems that we can drive significant change together. At Lex Autolease we are extremely pleased to deliver a solution that suited the needs of both BAE Systems and the naval base.”