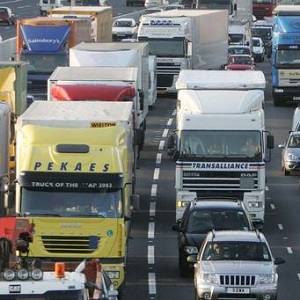 The amount of freight being transported on our motorways is making drivers fear for their safety, a new survey of over 1,000 drivers for Brake has found. The findings come as the Government publishes figures which show that lorry traffic on motorways has increased more than 15% in five years, reaching a record high of 7.9 billion vehicle miles in 2017.

More than three-quarters of drivers stated that too much freight is being transported on our motorways and have called for further investment in railways to alleviate the pressure on the network. Shockingly, more than a quarter of drivers thought it highly likely or likely that they would be involved in a fatal or serious crash on a motorway or dual carriageway at some point in the future. These findings come as the Government is introducing truck platooning trials and all-lane running on our motorways, leading road safety campaigners to decry the prioritisation of capacity over safety.

The Brake survey found that a significant majority of drivers, 77%, believe that truck platooning “sounds frightening”, even after having the nature of the technology explained to them, and that “if it went wrong the casualties could be very high.” Drivers also expressed doubt over all-lane running, as when asked if using the hard shoulder as a driving lane would improve safety, only a third agreed.

The Government’s “Road Traffic Estimates: Great Britain 2017”, published last week (5 July), shows that lorry traffic on motorways reached a new peak of 7.9 billion vehicle miles in 2017. The size and weight of lorries is also increasing – traffic of lorries with four or more axles was 44% higher in 2017 than in 1997, whereas for lorries with less than four axles it had fallen by 27%.

Joshua Harris, director of campaigns for Brake, said: “At a time when the traffic on our motorways is sharply increasing, these findings show that drivers have a deep-seated and genuine concern over their safety on these roads. Drivers are particularly wary over the increase in freight traffic and it’s clear that trials of truck platooning will only exacerbate this concern. We urge the Government to prioritise safety over capacity and to ensure that any change to our road environment, such as all-lane running, is robustly tested, and the public properly informed, before the roll-out on our roads.”

Phillipa Edmunds, freight on rail manager, Campaign for Better Transport, said: “Drivers’ fear of freight on our motorways is well founded, with the latest Government figures showing that HGVs are almost three times more likely than cars to be involved in fatal crashes on these roads. Transferring more freight to the railways is a key part of making our roads safer, cleaner and less congested so we urge the Government to take note of this report’s important findings.”