Discovery Beams The Desert Into The Classroom 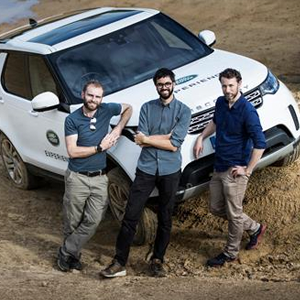 Thousands of children will explore the vast Jordanian desert and learn about water conservation thanks to a unique Land Rover Discovery expedition.

The specially prepared Discovery family SUV will support the recipients of the 2017 Land Rover Bursary, administered by the Royal Geographical Society (with the IBG). The ‘Water Diaries’ expedition will cross one of the driest countries on the planet to investigate how the population manages its most precious resource, water.

The three-man team, led by geography teacher Fearghal O’Nuallain, was waved off on its month-long journey by year 11 pupils from St Peter’s Catholic School, Solihull. The pupils will follow O’Nuallain’s regular online broadcasts to support their geography studies and thousands of others across the UK and Ireland are expected to join in

Team leader Fearghal O’Nuallain said: “The Discovery is going to be critical to the success of our trip. It will take us across the vast sand dunes and rocky terrain of Jordan while carrying everything we need. Beyond simple transport, the specially enhanced SUV will also be our accommodation, laboratory, classroom and broadcast studio for four weeks.”

The Discovery will also be home to field scientist Dr Shane McGuinness and documentary film-maker Temujin Doran, who plan to make weekly online broadcasts to budding geographers about their trip on their website. To guarantee the team’s lessons go ahead each week, Jaguar Land Rover’s Special Vehicle Operations (SVO) division prepared the unique Discovery.

An expedition roof rack will help carry the team’s kit and a pair of awnings will provide shelter from the elements for the regular broadcasts, while off-road lighting will illuminate the challenging terrain after dark. A split battery charging system and power inverter will drive the team’s electrical kit while a load space partition will ensure luggage remains safely in place over rough terrain. Additional fuel and water supplies will help the expedition go further.

Mark Cameron, Jaguar Land Rover Experiential Marketing Director, said: “Our partnership with the Royal Geographical Society (with the IBG) is important to us as part of our commitment to contribute to research, education and fieldwork expeditions.

“The Land Rover Discovery is one of the most capable SUVs in the world so our enhancements were focused on the specific requirements of the expedition. Adding extra storage capacity, both physical and electrical, plus some much-needed shelter, will ensure the team can live, work and broadcast in relative comfort despite their unforgiving surroundings.”

The Royal Geographical Society (IBG) Land Rover Bursary is now in its 10th year and 2017 is the first time the Discovery has been used to support the winners. The ultimate family SUV will have to contend with Jordan’s rugged landscape and the three-man crew have received expert all-terrain driving tuition to fully prepare them.

During a day with the instructors at the Land Rover Experiences East of England facility, in Rockingham, the trio were introduced to the Discovery’s comprehensive all-terrain capabilities, including the Terrain Response 2 system. The advanced set-up automatically configures the vehicle to suit surfaces with modes including Grass/Gravel/Snow, Mud and Ruts, Sand and Rock Crawl.

During the month-long expedition, the team plans to study how Bedouin tribes locate and transport water in the Wadi Rum region. They will spend four days living alongside nomads, stopping at a flourishing farm that uses ancient and modern techniques to provide almost all the food consumed in one of the driest places on earth, and meet experts working to save Arabian Oryx from extinction.

No trip to Jordan would be complete without visiting the city of Petra. Here the team will meet archaeologists working at the World Heritage Site. From this ancient civilisation, the Discovery will take the team to investigate an advanced infrastructure project that could bring water security to the entire region – a desalination plant in the Gulf of Aqaba and a pipeline linking the Red Sea with the Dead Sea.