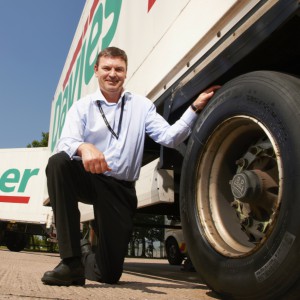 A significant decrease in tyre failures has been enjoyed by the company since rolling out Michelin Four Lives across their trailer fleet in July 2011.

The haulier’s 42 trailers collect hanging garments from North Africa and transport them through Europe to the UK, with third party hauliers providing the traction.

Since implementing their Michelin policy, Davies Turner have experienced no tyre failures across any of their Michelin-shod trailers – significantly increasing uptime, enhancing tyre longevity, and reducing fleet running costs.

John Lucy, Moroccan Services Manager at Davies Turner, said: “We noticed in 2011 that the quality of our remould tyres was deteriorating and tyre-related breakdowns were occurring at least once every four weeks, particularly when our fleet was abroad in hotter climates.

“That simply wasn’t safe or financially viable, and we were keen to resolve the problem promptly.

“We spoke to Michelin and Dan Lamb [Technical Manager] recommended a Michelin Four Lives policy to us; he wasn’t at all fazed by the demanding nature of our operation, and was keen to let the Michelin products do the talking and prove themselves in service.

“The results we have seen since have been fantastic.

“Whereas our previous tyres couldn’t cope with the heat in Spain and Morocco, Michelin’s new and Remix tyres have lasted time and time again, making our vehicles safer and saving us time and money.”

ATS Euromaster are responsible for servicing and maintaining Davies Turner’s tyres, ensuring they are regrooved when worn to 3mm.

They are then sent to Michelin’s Remix factory in Stoke-on-Trent to be comprehensively remanufactured, before being regrooved again – giving the haulier maximum longevity and performance.

Since the beginning of 2013, this has included a move to fitting X Line Energy T fitments, Michelin’s latest low rolling resistance trailer tyre.

The X Line Energy T is designed for trailers operating at high average speeds on motorways and major trunk roads.

It is Michelin’s first truck tyre rated ‘A’ in rolling resistance under the European tyre labelling programme.

Founded in 1870 and based in Manchester, Davies Turner’s trailers operate seven days a week, travelling up to 100,000 kilometres a year.