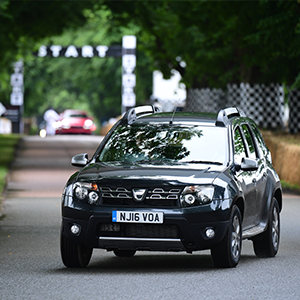 Dacia returns to the Goodwood Festival of Speed as part of this year’s Moving Motor Show where the simple, no-nonsense brand will be showcasing its full model line-up of recently updated cars, the New Sandero, New Sandero Stepway, New Duster and New Logan MCV Stepway.

Following its recent milestone of 100,000 sales in the UK since its country debut at the Goodwood Festival of Speed in 2012, a recent competition via the Dacia UK Facebook page was held. Competition winners will be treated to a special test drive of the new Dacia range up Goodwood’s famous hillclimb.

The New Sandero – the most affordable new car available to buy in the UK – is an award-winning five-door hatchback, available in three trim levels with a choice of two petrol engines and one diesel engine. The new interior and exterior upgrades for 2017 provide a more elegant and contemporary finish whilst providing the customer additional value and practicality. It is priced from £5,995. It has been named as WhatCar?’s ‘Best Small Car for less than £12,000’ for five consecutive years.

Recently launched in the UK is the New Logan MCV Stepway. Based on the recently revised New Logan MCV, the Logan MCV Stepway has a distinctively muscular style with flared wheel arches, roof rails and a ground clearance of 174mm. It maintains the same impressive boot space of 573-litres (VDA) – one of the largest amongst any segment in the market and is priced from £11,495.

The New Duster – the most affordable SUV available on the UK market – launched at Goodwood Festival of Speed last year, received a number of external and interior upgrades when it went on sale such as new upholstery, square headlights and a chrome grille. It is priced from £9,495 on-the-road.