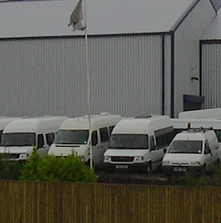 Commercial vehicle production continued its decline in October, figures from the Society of Motor Manufacturers and Traders (SMMT) have revealed.

Mike Hawes, Chief Executive of the SMMT, said: “The downward trend in CV production continued in October, given continually low levels of demand across the EU combined and structural and model changes in the UK.

“Despite some areas of good news, with UK bus and truck manufacturing growing in the month, the domestic CV manufacturing outlook remains negative for the rest of the year.”