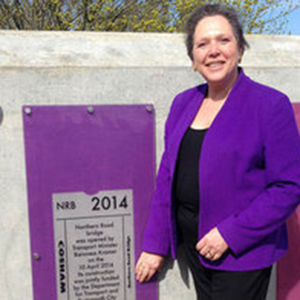 A new £12.6million bridge aimed at slashing congestion into and out of Portsmouth is now open.

The Northern Road Bridge, situated on the A397, was officially launched by Transport Minister Baroness Kramer last Thursday.

It replaces the previous structure built in 1927, which had been restricted to one lane of traffic for safety reasons.

Baroness Kramer said: “I would like to congratulate everyone involved in the successful construction of the new Northern Bridge, which will boost access to Portsmouth as well as to the local shops, the hospital and police station at Cosham.

“We know the importance of strong transport links to local communities and businesses.

“That is why we have provided £11million for this important scheme.”

On her visit to the city, Baroness Kramer also officially opened the Tipner Park and Ride Interchange, aimed at reducing congestion and kick-starting regeneration.

The total cost for the Tipner Park and Ride Interchange is £28.19million with a Department for Transport contribution of £19.487million.