Clayton Kingman To Work With VUHL 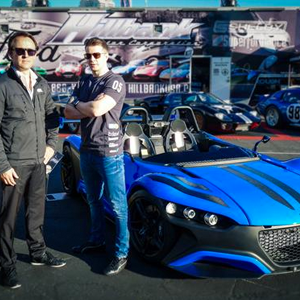 Lightweight Mexican supercar maker VUHL have announced Clayton Kingman as its Global Brand Ambassador as the company commits to increasing its global capacity.

The on-going evolution of the popular 05 and 05RR models has continued as expansion into the American and European markets reflected demand for the bespoke, lightweight supercar. Sales of VUHL cars have grown throughout 2017 with first cars being delivered to customers in the UK and the US, whilst a new showroom suite has been opened in France in addition to those in the UK and Mexico.

Plans for further growth into other markets where demand is high are already underway and Kingman is set to utilise his expertise in brand development and building business relations.

After the announcement of the appointment, Clayton Kingman said: “It is an enormous privilege to partner with VUHL as the company seeks to take the name across the world. I have a unique story, which has focused on developing relationships to build resources in order to sustain growth, both on and off the race track.

“I am excited to join the team at such a pivotal time as we look towards growing the VUHL brand and taking the name into markets where demand for the supercar is high.”

Kingman is associated with some of the worlds leading companies due to a unique social media campaign – #TwitterToTrack – which saw him embark on building a proposal and finding the sponsorship to fully fund a build and running of a race car, through social media networking.

Since then he has had a meteoric rise both on and off the track, gaining a large following and inspiring others to follow in his footsteps. The journey has led to Clayton’s exposure through both national & international media outlets.

The VUHL team and Kingman are on hand at SEMA in Las Vegas this week to discuss the development of the new 2018 05RR, partnerships and more on its future growth.

VUHL is now totally committed to increasing its global capacity by ensuring it has a presence in markets across the world where demand for its lightweight supercars is high.

Earlier this year, VUHL agreed a five-year partnership to provide cars to the popular Race Of Champions event. VUHL commissioned three 05 ROC Edition cars for the event, all of which were sold to customers. High demand for the Limited Edition car has prompted an increase of production for the model throughout 2017. To meet demand the construction of an all-new factory in Mexico has been underway this year and is scheduled for completion in early 2018.

VUHL co-founder Guillermo Echeverria said: “We are delighted to welcome Clayton to VUHL. He will play an enormous role in VUHL’s continued growth as we expand our presence across the globe.

“2017 has been an incredibly rewarding year, partnering with Race of Champions and opening up a showroom in France in addition to an all-new facility in Mexico. We look forward to continuing our development with Clayton for the foreseeable future.”