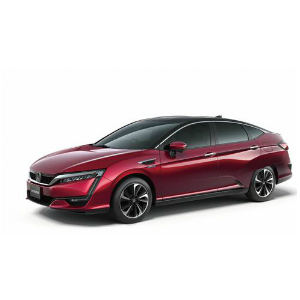 Following its world debut at 2015 Frankfurt Motor Show, the Honda Project 2&4 powered by RC213V will be shown as well as innovative mobility solutions, The WANDER WALKER and WANDER STAND. This broad portfolio of models is united by Honda’s global brand slogan – The Power of Dreams.

The Clarity Fuel Cell is the world’s first production hydrogen fuel cell vehicle sedan to house the fuel cell stack and drivetrain system under the bonnet. Incorporating Honda’s design principle of man maximum, machine minimum, this unique configuration provides outstanding roominess with seating for five. The size of the fuel cell stack and power generation system is reduced by 33 per cent compared to Honda’s previous hydrogen FCV, the FCX Clarity.

Leveraging the high output of the fuel cell stack and the power assist of the lithium-ion battery, the electric motor provides 130kW (177 PS) of output, enabling powerful acceleration and a feeling of smooth acceleration from standstill to maximum speed.

Honda has achieved a best in class fuel cell vehicle range per full tank of over 700 km (435 miles) all with a short refuelling time of around 3 minutes, providing similar day-to-day convenience to that of a traditional petrol or diesel powered vehicle.

The Clarity Fuel Cell will be commercially available in Japan from early 2016. Further information on the launch of Clarity in Europe will follow in 2016.

Billed as a ‘race car for the road’, the all-new Civic Type R is powered by the most extreme and high-performing Type R engine ever built, and will set new standards in the high-performance front-wheel drive hatchback segment. Produced at Honda of the (UK) Manufacturing, the car will be exported back to the company’s home market. Sales in Japan of the all-new Type R will commence towards the end of 2015.

The NSX is a super sports car for a new era. The new model features lightweight body construction and a new inline 3.5-litre V6 twin turbo engine as part of the three-motor SPORT HYBRID SH-AWD (Super Handling All-Wheel Drive) system. The engine is combined with three electric motors (two of which are housed in the front wheels) via a 9-speed Dual Clutch Transmission. The all-new NSX will be launched in Europe during 2016.

Other new models for the Japanese market include the Odyssey hybrid, a premium minivan which brings together a generously roomy cabin, distinctive styling and an exhilarating drive.

Honda will also be displaying the all-new S660 open-top sports mini-vehicle. The S660, has been designed to deliver the same excitement as a fully-fledged sports car in a compact and efficient package.

The N-Box, Japans best-selling minicar, will also be on the stand with a new package designed to minimise the chances of occupants getting sunburnt. The special package blocks 99% of UV rays as well as IR (heat) rays and is the first application of this technology in the world.

Following its global debut at Frankfurt Motor Show in September, the Honda Project 2&4 powered by RC213V will be on display at Tokyo Motor Show. Designed to deliver an immersive driving experience, Honda Project 2&4 utilises Honda’s expertise on two and four wheels to provide the freedom of a motorcycle and the manoeuvrability of a car.

The WANDER STAND allows two adults to ride side by side to experience a new way to drive. Honda’s Omni Traction Drive System allows complete freedom of movement forwards, backwards, laterally and diagonally. The width of the concept allows it to access the most narrow of streets, while an automatic drive mode allows occupants to relax and explore new territory.

The WANDER WALKER is designed with the city of the near future in mind, where personal mobility solutions will give riders free access to all parts of their environment. The highly compact design is 540mm wide and can easily fit down narrow streets thanks to its innovative steering system. The concept also features a display tablet, which doubles as the key for the vehicle.