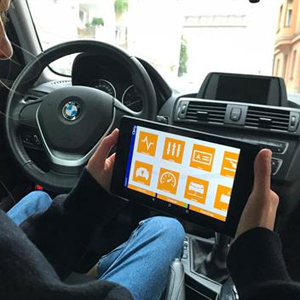 A new app, that helps car buyers to uncover fraud in used cars they are looking to purchase is now officially available in the UK. Carly’s Connected Car app, available for BMW, MINI, Mercedes and Volkswagen Group cars, can tap into the car’s multiple computers (ECUs) to check for correlation with the visible speedometer and identify whether data has been manipulated.

Results from mainland Europe where the app has been available for three years, suggest the issue is bigger than consumers may think. Data collected from 300,000 cars highlighted that 23 percent of MINIs had experienced some form of manipulation with the figure rising to 27 percent for the E60 BMW 5 Series. On average, 15 percent of all BMWs checked had some form of tampering with 90% being related to the mileage and the rest concerning manipulating the vehicle identity itself. One of the most remarkable cases was a BMW 5 Series (E 60 generation) built in 2000: while the speedometer indicated 18,703 miles, the car had actually been driven 120,564 miles. Such a significant difference could add thousands of pounds to the value of the car.

“Unscrupulous members of the motor trade or even private owners with access to the right equipment can easily adjust the electronic mileage clocks commonly found in modern cars,” says Avid Avini, one of Carly’s founders. “Our app goes beyond the visual and paperwork check that most car buyers rely on, interrogating up to 50 control units in the car to compare data such as mileage stored in them, with what is visible on the dashboard.”

As well as the mileage checks, the app can indicate how a car has been driven by its previous owner. The app displays fuel economy as well as average speed and journey times that the car has been used for. It also lists fault codes logged in the car, highlighting potential problems with the engine, brakes, infotainment, climate control and steering systems, sometimes before they have appeared visibly. The app can be used to clear some codes or error messages that typically would have required a costly trip to the dealer, saving diagnostics fees that can run into hundreds of pounds at main dealers.

Other preventative maintenance tools include being able to initiate regeneration for both Diesel Particulate Filters (DPF) and NOx filters, preventing emissions and engine issues. “Because many cars only do short journeys, they don’t get the right sort of use to regenerate the DPF and the filter becomes blocked, leaving the driver stranded,” adds Avini. “If it gets too bad, it can cost £1000 for a new filter but the Carly app can be used to initiate regeneration from your phone and its progress can also be tracked so you know it has been successfully completed.”

Advanced users are also catered for with the ability to personalise settings and access hidden features. For example, being able to customise when the lights come on.

Prices start at £44.90 for the adapter (available from Carly website or Amazon) with the app (either iOS via the app store or Android via Google Play) available in both Lite (that offers a simple check function) and Pro versions. The Pro version of the app (£43.99) offers consumers the chance to control functions such as keeping the exhaust valve open, changing when the lights come on, or activating a digital speedometer alongside the diagnostics and car check features.

Carly has created app versions for BMW (incl. MINI), Mercedes and VAG cars (Volkswagen, Audi, SEAT and Skoda) that are available in the Apple AppStore and Google PlayStore. Moreover, Carly has a direct distribution of their Original adapters through Amazon UK.