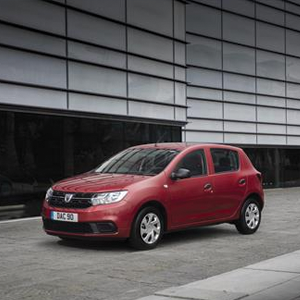 The unrivalled value of the multi-award winning Dacia Sandero has seen it win another trophy — the ‘shockingly affordable’ hatchback taking the title of ‘Mid-sized Used Car Of The Year’ at the Car Dealer Used Car Awards 2017.

With the Dacia Sandero already the most affordable new car on sale today in the UK – costing as little as £5,995 – the award recognises its star quality in the used car market.

Not only did the leading automotive industry title’s judges praise the no-nonsense Sandero for how it offers so much for so little, they also singled out its robust build quality as a major benefit to pre-owned car buyers.

Making a significant contribution to the judges’ decision to award the Sandero was data from Auto Trader, cap hpi and Glass’s, which looked at residual values and the duration it took for vehicles to be sold.

The Car Dealer Magazine annual Used Car awards, celebrate the best of the best in the used car sector with awards spanning more than 20 categories.

James Baggott, CEO of Baize Group and Founder of Car Dealer Magazine, said: “Mid-sized cars are central to the success of dealerships up and down the country, offering a more usable practicality than city cars but still being affordable to run.”

“The Dacia Sandero is one of the most affordable new cars around, but it still remains a strong player in the used market. It offers great value for buyers and the durability of the product means it stands the test of time.”

On the Dacia Sandero notching up another award win, Louise O’Sullivan, Head of Dacia UK, said: “We are delighted to add another award to Dacia’s trophy cabinet and it’s very pleasing to see that not only is the Sandero leading the way when it comes to being an excellent new car purchase, it’s also proving to be just as desirable as a used car. With its proven reliability, unbeatable value, low running costs and standard three-year/60,000-mile warranty, buying a pre-owned Sandero offers fantastic peace-of-mind to cost-conscious customers.”

The multi-award winning Dacia Sandero is priced from £5,995 – making it the most affordable new car on sale in the UK – while it is also the most affordable new car with air conditioning by a margin of nearly £1,500. Dacia Sandero customers can choose from three trim levels – Access, Ambiance and Lauréate. Depending on specification, it is available with a choice of two efficient petrol engines and one diesel, with the dCi 90 engine returning up to 80.7mpg (NEDC combined) and emitting only 90g/km CO2.