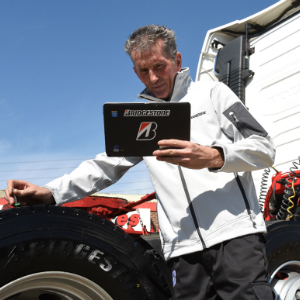 Bridgestone’s award winning Retorque App, which has been downloaded as far afield as Australasia, has been enhanced to include van wheel data for more fleets to benefit from, it was revealed.

After spending more than 10 years of data gathering from vehicle manufacturers across the UK, Bridgestone revealed the commercial motor industry’s first ever re-torque safety app for all commercial vehicle operators to benefit from.

And now, the world’s largest tyre manufacturer has expanded the technology yet further to include wheel security data from all main van manufacturers.

The free-of-charge app is available on the Apple and Google Play stores and has already been downloaded nearly 4,000 times across 65 different countries, including New Zealand, Saudi Arabia, and Singapore.

Bridgestone’s product and marketing manager Andy Mathias said: “Bridgestone recognises the increasing importance of van wheel security in this fast growing sector. Providing up-to-date data is an area of support that our fleet customers and Bridgestone Partners alike were looking for.

“The download and usage statistics for the Retorque App have been amazing so far and has now been translated into six European languages. In addition, it recently won Bridgestone’s internal ‘vision award’ for Outstanding Corporate Citizenship.

“And when winning the NTDA’s Tyre Manufacturer of the Year award for a second successive year, the retorque app was presented as a key point of difference and compelling factor during our award submission back in September.

“The feedback from our users is that the app is convenient to use, so it made sense for us to expand this to the van sector. We’re confident it will prove to be a success and will help out a great many more fleets in the future.”

The safety implications from a detaching wheel from a truck, bus or trailer can be fatal, with research from road safety charity Brake highlighting the significance of the issue.

It’s estimated that several hundred wheel detachments occur each year in the UK, mostly involving large commercial vehicles such as trucks and buses. According to Brake, one in six (16%) wheel loss incidents causes injury and one in 24 (4%) causes death.

If a wheel becomes detached while the vehicle is moving it can accelerate up to 93mph and would hit an oncoming vehicle, pedestrian or cyclist with incredible force. It can also cause the driver who has lost the wheel to lose control and crash.

Instead of leafing through pages of a manual for information, Bridgestone has developed its app – available from Google and Apple stores – to make the process as simple as possible and freely available for everyone, including fellow tyre manufacturers.

The Retorque App is the latest Total Tyre System from its Total Tyre Care provision, which allows businesses to keep tight control over their tyre-related costs courtesy of a hat-trick of services.

It has been tailored to meet the needs of every commercial fleet operator and is quite unlike anything else on the market.

Total Tyre Care is built around the following three components: