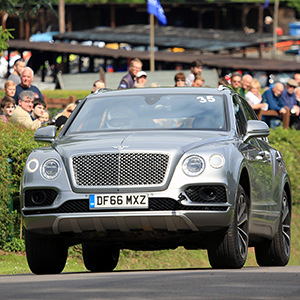 Bentley Motors took Shelsley Walsh Hill Climb by storm over the weekend with the 600bhp Bentayga shocking the crowds.

Vicky Parrott drove the Bentley Bentayga up the famous hill climb with tremendous accuracy and speed to secure the first ever ladies hill record for an SUV, 80 years after Bentley last held a ladies record at the hill climb in 1927.

Not only did Bentley take the ladies record but they took the overall hill record for an SUV and also won their class, which include the supercharged Land Rover Discovery SI6 and the Mitsubishi Outlander PHEV.

The Bentley Bentayga took off from the start line, sitting back on its haunches, as 600bhp was let loose and stormed up the hill crossing the finish line at 99mph and setting a record time of 35.53 seconds.

Mark Constanduros, Commercial Manager for Shelsley Walsh commented “The Bentayga really surprised many people over the weekend and has now put a mark in the sand for others to beat.”

“Vicky adapted very well to the hill, having never experienced it and gained huge respect from the other competitors.”

“It was fabulous to see Bentley enter the Bentayga and to create some new history. We hope other manufacturers will come forward next year and hope to see Bentley back with us too.”

Vicky Parrott commented “I have driven on many circuits but this is my first visit to Shelsley Walsh and what a fabulous place it is, very narrow and daunting but this Bentayga is some serious machine and has enabled me to set a new women’s record, so I am very grateful to Bentley for giving me this opportunity … oh and also for the loan of the special Bentley racing overalls with the name of a certain David Brabham embroidered onto the waist band!”